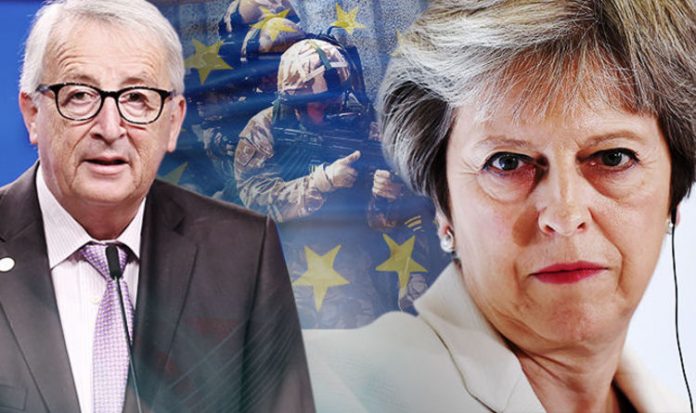 In yet another warning to Brussels, Alexander Vershbow, who served as Nato deputy secretary general between 2012-16, has said the bloc’s leaders should prioritise a defence and security pact with Britain

The American diplomat said the EU’s militarily capability would be diminished if it was to lose the “experience and leadership” of Britain which would in turn hamper the credibility of any plans for an EU-wide army.

Speaking to Express.co.uk on the fringes of the Nato summit in Brussels, Mr Vershbow said a post-Brexit EU-UK security pact is “very important and should be seen as a priority for Europe when the UK departs the EU with 20 percent of its total military capability”.

He added: “I think they need to draw on the UK capabilities, experience and leadership if they want their own mechanisms to be credible.”

The EU has long wanted to establish its own bloc-wide military force, and recently agreed to adopt a common defence policy, however, many have argued the plans would be undermine Nato’s activities in Europe.

In a second warning, Mr Vershbow said it would be easy for Brussels to believe it can handle all of its security problems without the assistance of Nato.

The diplomat said: “If the European contributors are serious then they could actually create some new mechanisms for addressing crisis on Europe’s doorstep without requiring Nato or the United States to put its troops into harm’s way.

“It could be a good step for burden sharing if it is done right – that means we are being backed by a real capability.

“If the alliance is getting more divided, however, it may give Europe a false sense that it can handle all of its security problems without Nato, and I think that is a push for them with today’s capabilities.”

Mr Vershbow doesn’t believe military side projects conceived in Brussels would be of detriment to Nato, and could in fact compliment the alliance if operated correctly.

French President Emmanuel Macron’s European Intervention Initiative could help win Donald Trump in after he vented his frustration at the number of European countries failing to hit their two percent military spending targets.

“The Americans interests will, ultimately, ,” Said Mr Vershbow. “This could be very much complimentary.”