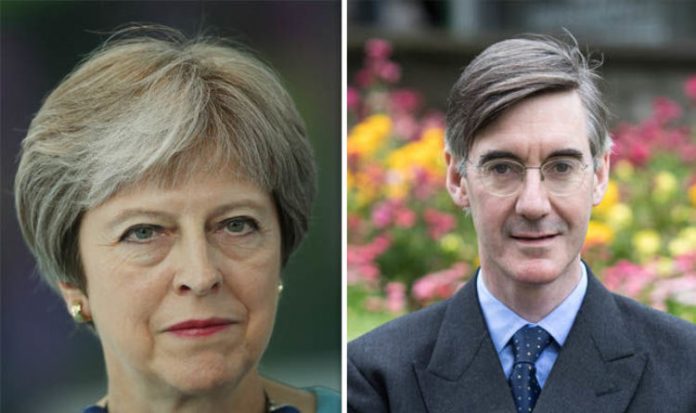 Mrs May has said she will not accept any criticism of what has been agreed after writing to Tory MPs saying “collective responsibility is now fully restored” within the Cabinet, effectively warning ministers not to criticise the agreement.

She said she hoped these plans, which will be published in a formal white paper next week, will move talks with the EU forward.

The plans would keep the UK closely tied to Brussels after leaving the European Union, but Tory Eurosceptics warn Mrs May that her “red lines” are turning pink.

But the white paper would still need to be assessed by the European Union as the Prime Minister pushes for the creation of a new UK-EU free trade areas for goods in a “common rulebook” that would remove checks and controls in a “facilitated customs arrangement”.

This would treat the UK and EU as if they were a “combined customs territory”.

Despite Mrs May getting her Cabinet to agree to these plans, Conservative MP for North East Somerset Jacob Rees-Mogg demanded to see more details of what has been agreed.

Mr Rees-Mogg warned that the common rulebook could limit the UK’s ability to seek out trade deals with countries outside the EU if it means regulations would have to apply to any and all goods going into the UK.

He told BBC Radio 4’s Today programme: “As with eggs: an egg that is very softly boiled isn’t boiled at all. A very soft Brexit means that we haven’t left, we are simply a rule-breaker.

“That is not something that this country voted for, it is not what the Prime Minister promised.”

Mr Rees-Mogg added that “it is possible that this deal is worse” than a “no deal” Brexit.

Veteran Eurosceptic Sir Bill Cash told BBC’s Newsnight he was “deeply disappointed, to say the least” and the plans “raise a lot of very serious questions”.

Cabinet Brexiteer Transport Secretary Chis Grayling publicly defended the plans saying: “I didn’t campaign to leave the European Union to have a different specification of motor car on sale in the UK to the one that’s on sale in France.

“This is simply saying that we will effectively sell the same products across Europe as we do now – it’s what business does and would do anyway, nobody produces a different product for one country.”