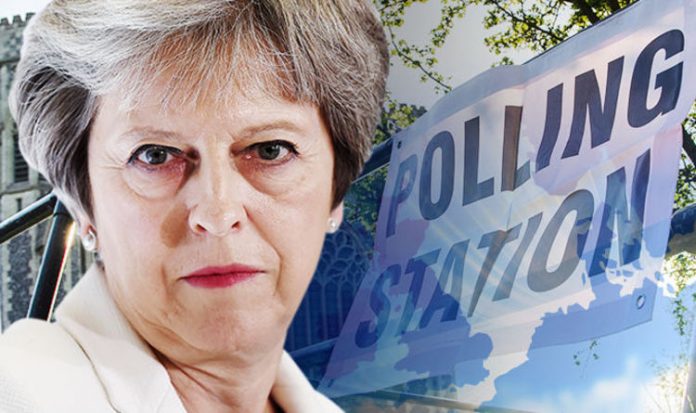 A rebel revealed the threats by Chris Pincher, the deputy chief whip, telling the Times newspaper: “Pincher said they would pull the third reading of the trade bill and call a vote of confidence.

“He said we’d be responsible for a general election and putting Jeremy Corbyn in No 10.

“It was appalling behaviour. Totally disgraceful.”

Under the Fixed-term Parliaments Act, two votes of no confidence within two weeks apart, both carried by a simple majority in the Commons, would have triggered a general election.

In one of the most tumultuous periods in recent British political history, there have been four major elections in the past four years: the Scottish independence referendum of 2014, the 2015 UK election, the Brexit referendum of 2016 and the snap election called by Mrs May last year.

At the end of a tense series of votes on Tuesday night, the Trade Bill cleared the Commons when MPs backed giving the measure a third reading by 317 votes to 286, a majority of 31.

The votes marked the end of a tumultuous series of Commons debates over the Prime Minister’s Brexit plans.

She had faced threatened revolts by both Brexiteer and Remain-supporting Tories angry at her compromise plan for a future relationship with the Brussels bloc.

Now the bill will undergo further scrutiny in the Lords where it is likely peers could inflict further defeats on the Government.

International Trade Secretary Liam Fox told MPs the legislation would be “the confident first step that the UK takes towards establishing itself as an independent trading nation for the first time in over 40 years”.

Ministers are now braced for fresh attempts to amend the Bill by pro-Brussels peers in the House of Lords.