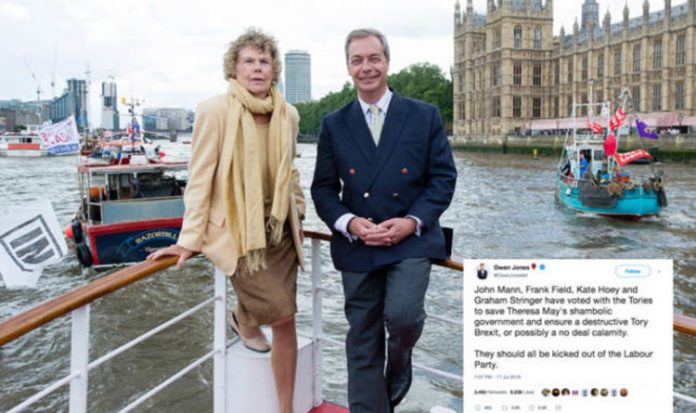 The bitter battle in the Commons continued as MPs voted on an amendment called ‘New Clause 18’ to the Trade Bill that was brought forward by Remainer Tory MPs Stephen Hammond and Nicky Morgan.

The amendment would have forced the Government to stay in the customs union if Brussels cannot be persuaded to allow Britain to have a free trade area by January 21, 2019.

Kate Hoey along with Labour MPs Frank Field, John Mann, and Graham Stringer voted with the Government while the rest of their party backed the amendment.

Now the MP for Vauxhall faces more serious calls for her to be removed from the party.

Last night Mr Jones, a Guardian Columnist, tweeted: “John Mann, Frank Field, Kate Hoey and Graham Stringer have voted with the Tories to save Theresa May’s shambolic government and ensure a destructive Tory Brexit, or possibly a no deal calamity.

“They should all be kicked out of the Labour Party.”

Critics of the pro-Brexit MP Ms Hoey, from within her constituency, have papered a motion of censure.

The motions demands that the party leader Jeremy Corbyn withdraws the party whip and stops her from standing again as an MP.

At least one ward and one Momentum meeting have passed the motion and it is expected to be put before a constituency meeting next Thursday.

The motion reads: “As Labour members who campaigned for Kate Hoey at the last general election despite many of us disagreeing with her about Brexit, we are appalled at the way in which she is demonstrating that her personal views take priority over representing her constituents and our party by voting to enable this rotten, inept government to stay in office.”

It goes on to say: “The leader of the Labour party suspend Kate Hoey from the parliamentary Labour party and remove the whip”.

Yesterday Ms Hoey told Sky News host Adam Boutlon she was furious and claimed that “you are not allowed to have views or opinions” on Brexit without being labelled “right-wing”.

She said: “This is the very sad thing now that we have got into the situation where you are not allowed to have views or opinions without being absolutely railed as being extreme right-wing.

“I see my constituents daily. A lot of tweets are from activists and not from the Labour Party.

“The reality is, a lot of, inverted commas, ordinary people in Vauxhall just want us to leave.

“And those who do want to leave, remember a third of people in Vauxhall voted to leave, they want us to get on with it.”

On Monday Ms Hoey was one of three Labour MP’s to vote with their Tory opponents on an amendment that only passed by three votes.

Ms Hoey, Frank Field and Graham Stringer voted on an amendment that will ensure the UK is out of the EU’s VAT regime.

The Labour Party told Epress.co.uk they do not have a comment at this time.