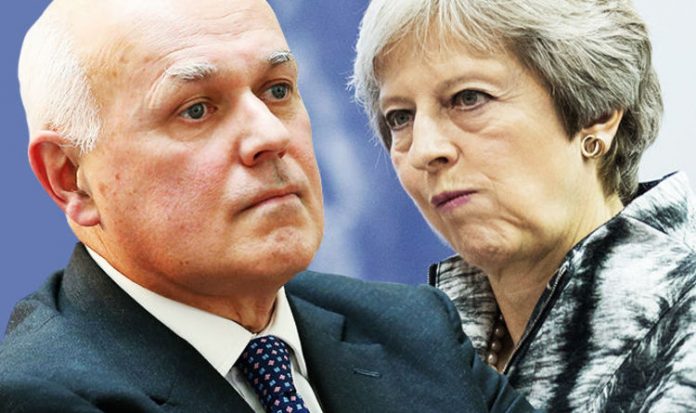 In a letter to two senior pro-Brussels MPs, former Cabinet minister Iain Duncan Smith dismissed proposals for Britain to temporarily stay in two European trade bodies while a full free-trade deal with Brussels is thrashed out over several years.

“The British public would quickly recognise, that it doesn’t deliver their vote to leave,” Mr Duncan Smith wrote.

He also feared the plan would leave the Government “unable to deliver the referendum vote, with all the dire political consequences for our party”.

Both MPs have recently backed the idea of Britain remaining in the European Economic Area (EEA) and joining the European Free Trade Area (EFTA) after Brexit next year as a staging post towards a new relationship with the EU.

The idea is thought to have been gaining support among some Tories following widespread rejection of Theresa May’s “Chequers” blueprint agreed with the Cabinet at her country retreat in July.

In his letter, Mr Duncan Smith wrote: “I am writing to you to welcome your view now that the Chequers Plan satisfies no one.

“I assume you have reached this conclusion because you can see first it seriously weakens the EU’s four freedoms and second, at home it fails to deliver the pledge to voters to take back control of our borders, laws, money and trade.”


Sadly, such a course of action will not deliver the Brexit people voted for either

But he said of their plan: “Sadly, such a course of action will not deliver the Brexit people voted for either.

“Such membership would consign the UK to the worst of all worlds becoming a rule taker with no influence.

“Under EEA or EFTA membership the UK would be committing itself to a legally binding legislative relationship without any input into the law-making process.

“We would have to follow the EU Single Market rulebook on goods, services and the free movement of persons, as well as environment, consumer protection and employment law.

“Such an approach is quite simply  legislation without any representation.”

Mr Duncan Smith warned that the EEA/EFTA plan could lead to a massive backlash against the Tories from Leave voters.

“Putting up this EEA/EFTA option will get us nowhere,” he wrote.

“As I understand it, the political justification for this now seems to be that you believe we can leave in two stages, with the EEA/EFTA just a step on a journey to a free trade deal.

“Yet the British public would quickly recognise, that it doesn’t deliver their vote to leave, with us stranded unable to deliver the referendum vote, with all the dire political consequences for our party.”

Last week, Mr Boles condemned the Chequers plan as the “humiliation of a deal dictated by Brussels”.

He put forward a rival “Plan for a Better Brexit” that included a proposal for Britain to temporarily join both the EEA and the European Free Trade Association.

While the country was temporarily “parked” in the two trade bodies, a fully detailed, long-term free trade treaty with Brussels could be worked out over several years, Mr Boles argued.

Some pro-Brussels Tories are understood to have been in talks with Labour and Lib Dem MPs about pushing for Britain to remain in the EEA.

EFTA is a separate regional trade organisation including Iceland, Liechtenstein, Norway and Switzerland.

Angry exchanges were said to have erupted when the pair met last month for just the second time.

Mr Barnier was said to be “absolutely furious” about the row, which was understood to have centred on the future of the land border between the UK and Ireland.

Prince Harry news: Duke of Sussex told to stay out of the 2020 Presidential US election | Royal | News (Reports)