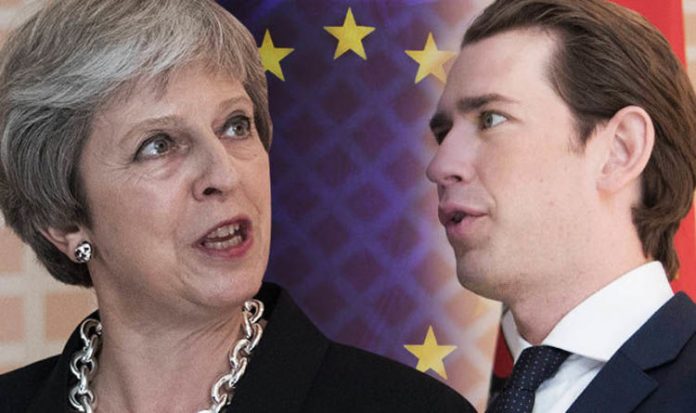 Meanwhile, leading figures in the European Parliament – which gets a vote on whether to approve any final deal between Britain and the EU – signalled they were currently inclined to turn it down because of failure to solve the issue of the Northern Ireland-Irish Border after Brexit.

The Prime Minister visited Austria for talks with her counterpart there, and also the Czech PM, as part of a UK government cross-Europe charm offensive this week by ministers.

Austria’s 31-year-old right-wing Chancellor Sebastian Kurz told his guest at a brief media appearance in Salzburg that he felt UK-Brussels talks were “going quite well” – although he still viewed Brexit “negatively”.

“From our point of view it is important to avoid a hard Brexit,” he added – although UK observers were unclear whether by this he actually meant a “no-deal” exit.

Mr Kurz, whose country has just assumed the EU’s six-month rotating national presidency, also hoped the UK’s talks with EU chief negotiator Michel Barnier would find a “solution” by October, when EU leaders aim to reach political agreement on the terms of a deal ahead of Britain’s exit next March 29.

Mrs May hailed the strength of Anglo-Austrian relations and added: “We are delivering on a vote of the British people. They chose to leave the EU and we will deliver on that.”

The UK Government is said to be entertaining hopes of getting the other 27 EU nations to persuade the EU Commission to relax its hardline position on the bloc’s behalf in talks with Britain.

Leaders including German Chancellor Angela Merkel are said to be frustrated at slow progress and want to hear direct from Mrs May – possibly at September’s informal EU summit.

But ahead of Mrs May’s trip where she also met met Czech PM Andrej Babis, the Czech Europe minister insisted the bloc was united behind Mr Barnier’s approach.

Ales Chmelar told the BBC: “The fact that we are maybe critical of some aspects of EU policies does not mean that we wouldn’t stand behind a very strong position on the integrity of the single market”.

Czech differences from Brussels on some policy areas did not allow “a more open position for trying to find loopholes in the EU position” on Brexit, he warned the UK.

He also backed Mr Barnier’s rejection of Mrs May’s cornerstone customs plan to have Britain collect import tariffs on the EU’s behalf, on goods destined for the Continent.

UK negotiators are hopeful of winning Mr Barnier over the customs plan but EU sources said that was “wishful thinking”.

Mrs May stressed to Mr Kurz and Mr Babis that her latest blueprint will maintain frictionless cross-Channel trade, that it was in all sides’ interests to reach a good deal, and that UK-Brussels negotiations must intensify over the summer.

Meanwhile, the European Parliament delivered its own stark warning to Mrs May.

Its Brexit Steering Group signalled the Parliament would not approve the Withdrawal Agreement unless there was a “credible, genuine and operational” backstop proposal to prevent a hard border between Northern Ireland and Ireland if a permanent solution canot be found in time.

The assembly’s Brexit negotiator Guy Verhofstadt added “The UK Government can no longer postpone coming forward with its own workable and legally operative proposal for a backstop.

“Any suggestion that the UK Government will renege on the commitments it has already made only risk to undermine trust and sabotage negotiations.”

Britain’s former ambassador to the US Sir Christopher Meyer – a longterm champion of a clean Brexit – took a more robust approach.

He recommended in a Tweet that the UK should tell the EU Commission: “OK, you must live with the logic of your position. We’ll go on World Trade Organisation terms (which is hardly ‘crashing out’). Later we can negotiate a third-party agreement like any other non-EU state. That means no divorce bill and no fishing in our waters without a licence.”

He added that Britain could say that nothing will change at the frontier between Northern Ireland and Ireland and “if Brussels and Dublin want a hard border, that’s their problem.”