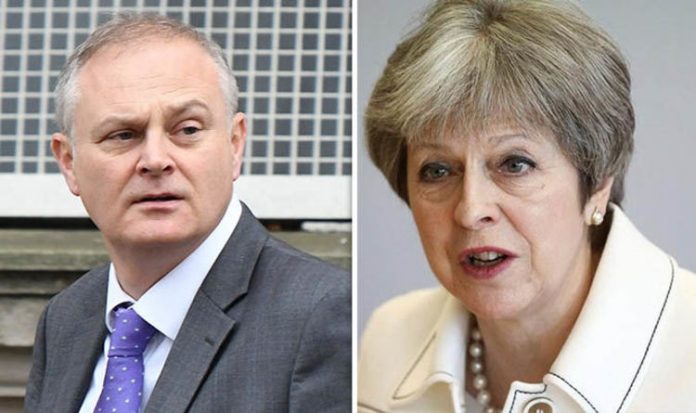 Stewart Jackson lashed out at Mrs May’s conservative government, declaring that her Chequers plans may leave Britons feeling “deceived and betrayed” about Brexit.

Mr Jackson, left his role as special adviser to the government after Mr Davis resigned from his position as Brexit Secretary, in protest against Mrs May’s approach to Brexit negotiations.

Speaking about the Tory Party’s standing at the next general election, Mr Jackson told Westmonster: “It has the potential, if it’s not ameliorated in some way, to be as bad as the Conservative Government in ’92 in terms of the ERM.

He lashed out at the Tory party, declaring that Britons would “take to the ballot box” if the Conservative party do not deliver Brexit as “promised”.

Mr Jackson added: “If people feel deceived and betrayed by the Government in not delivering the Brexit they were promised, I think they will take revenge at the ballot box and I think that has very serious consequences for the future of the Conservative Party.”

He said Mrs May’s would “have difficulty” passing her Chequers plan through parliament, as there are several key issues that must be discussed before MPs would agree to her policies stated in the White Paper.

Even at the time of his resignation, Mr Davis said that UK’s “current trend of policy and tactics” meant it was “less and less likely” that the Conservatives would deliver the manifesto to leave the single market and customs union.

Mr Jackson added: “I think there are still very significant concerns that members of parliament have about the continuing jurisdiction on the European Court of Justice, on the impact on trade, on continued alignment for decades to come on manufactured goods.

“I think essentially it’s going to have difficulty passing not least because of the financial agreement unless we absolutely have nailed down.”

The former special advisor lashed out at Mrs May’s White Paper, labelling it as a “watered down version of Brexit”.

Speaking about the Chequers plan, he said: “I think its a very neutered watered down version of Brexit, and it’s not something that has found favour with the Conservative Parliamentary party or the wider party membership or the public if you look at opinion polls.

“So I think the Prime Minister has a very stark choice, she reboots it or she scraps it.

“And the alternative is we go back to the free trade agreement that we had ready to go, the Canada plus plus model, where we could have agency agreements and association agreements with the EU where we had mutual recognition of professional standards.

He added: “What chequers gives us is full harmonisation which is, not in my opinion, Brexit.”

However, Mr Jackson is confident that the UK will strike a Brexit deal with the EU when Britain leaves the bloc.

He said: “But there’s still 6 months to go at least where I think we got an opportunity to secure a deal with the European Union.”