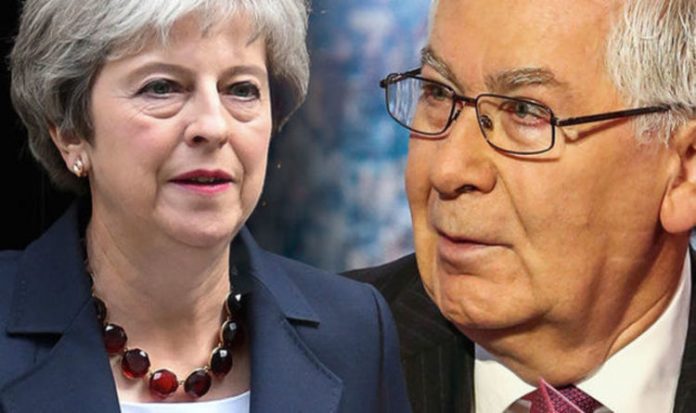 THERESA May’s Brexit push suffered another blow today when a former Bank of England governor condemned the handling of the EU negotiations as “incompetent”.

In a scathing attack, Lord King said it “beggars belief” that the country appeared to be so ill-prepared for next year’s departure from the bloc.

The cross-bench peer, a firm Brexit supporter, warned that the lack of preparations left the UK without a credible bargaining position.

“Frankly, if a government cannot take action to prevent some of these catastrophic outcomes, whatever position you take on the EU, it illustrates a whole lack of preparation,” Lord King said in a BBC interview today.

Asked if that meant the Government had been incompetent, he said: “The group of people tasked with trying to make decisions on all of this is Parliament as a whole not just the Government, and the Civil Service, who have brought us to a position where we are now being told that we have to accept a certain course of action otherwise it would be catastrophic.

“Now, it beggars belief that the sixth biggest economy in the world should get itself into that position.”

Lord King, who was in charge of the Bank of England from 2003 until 2013, said that credible plans should have been put in place to leave without a deal because Britain cannot impose a deal on the EU.

He feared biggest risk to the UK was that the referendum had failed to resolve the issue of Brexit and it “isn’t going to go away”.

The MP, who is chairman of the 60-strong European Research Group of backbenchers, said: “I think he’s somebody that one would listen to very seriously.

“He’s a very distinguished former governor and he has raised some important concerns about the lateness of the preparation for leaving on World Trade Organisation terms and the way the negotiations have been carried out.

A senior Tory source responded to Lord King’s comments by insisting the Government was “working hard to secure a deal the good deal that’s in the best interests of the country but also preparing thoroughly for all eventualities, as you would expect a responsible government to do.”