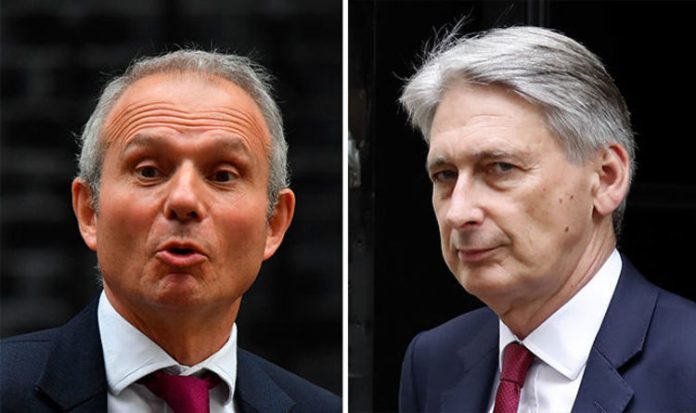 The Chancellor said in a letter to the Treasury select committee that a no-deal withdrawal would have “large fiscal consequences”.

Shadow Chancellor John McDonnell said Mr Hammond’s letter and timing of its publication was a “hand grenade” to Brexit.

This is despite the Brexit Secretary, Dominic Raab, saying only hours earlier that the “vast majority” of consumers would not notice the impact.

But David Lidington, the Cabinet Office Minister and Theresa May’s de facto deputy in Cabinet, seemed to support Mr Hammond’s position and dismissed claims that the Chancellor’s letter was a “deliberate intervention”.

Mr Lidington told BBC Radio 4’s Today programme: “I don’t check my colleagues’ letters any more than they check mine.

“We are sending out letters to MPs and ministers practically every day of the week trying to meet deadlines that we set ourselves for giving people replies within a certain number of days otherwise we get ticked off for being dilatory in responding to Parliament.

“I really don’t think that there is anything new about this. What is clear is that no deal is not a desirable objective.”

The Chancellor’s letter claimed that a no-deal Brexit could increase borrowing by £80billion a year by 2033 and was not cleared by Downing Street.

Mr Hammond’s letter also highlighted a cross-Whitehall analysis which prompted claims of “Project Fear” when it was published earlier this year.

He also revealed the Government is planning to publish a new version of the analysis before the final vote on the Theresa May’s Brexit deal.

Government sources told The Daily Telegraph, the Chancellor “knew what he was doing”.

The letter came after the Government published contingency plans for a no-deal Brexit.

This included warnings that online shoppers face higher card payments for buying products from companies based in the EU.

But the Brexit Secretary downplayed fears and said the majority consumers would not notice a difference.

He said: “For the vast majority of consumers in this country there is not going to be much change at all, if it’s noticeable.”