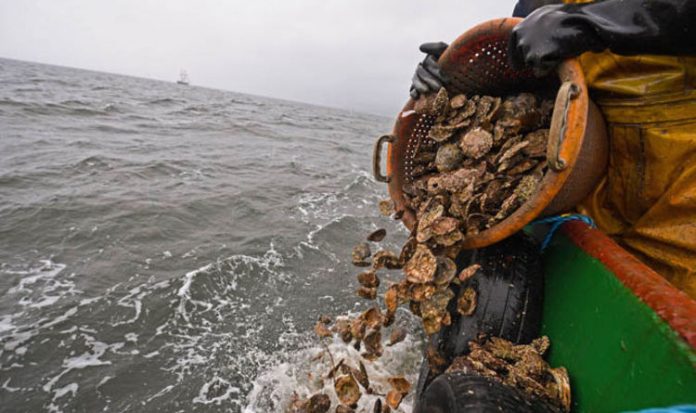 The pro-Brexit former Environment Secretary will join campaigners at sea off the English southcoast at Eastbourne on Friday to witness and highlight the scandalous waste and injustice inflict by European Union quota schemes.

Ahead of the event, Mr Paterson said that a long transition period after next March’s official Brexit date would be “fatal” for UK fishermen because they will be obliged to keep following EU rules.

They particularly fear the new EU ban due from next year on dumping overboard any fish they catch beyond their daily EU quotas for particular species.

Campaigners say the ban does not address the root problem caused by quotas, and just means vessels will have to stop fishing once they have caught the whole of their smallest species allocation, to avoid the risk of catching more.

Outlining his criticism of the proposed deal with Brussels that Mrs May and ministers agreed at her Chequers country residence last month, Mr Paterson said: “Discards show that the fundamental approach of the EU Common Fisheries Policy is beyond redemption and cannot be continued.

“Brexit provides a wonderful opportunity to rebuild our fishing industry and improve our marine environment after years of neglect, but the timid proposals from Chequers fail to grasp it.

“Instead, if we leave under the bold terms of a World Trade Deal, we can immediately repeal the Common Fisheries Policy and revert to international law, automatically retaking control over all our water and resources and negotiating with our neighbours on an equal footing from a position of strength.

“We can devise a world-leading, scientifically informed, accountably controlled management system based on allowing fishermen to land and record all catches in return for capping their available fishing time at sea.

“Such policy would allow the economic, social and environmental potential to be fully realised.

“That way, and only that way, we can ensure sustainable fisheries and a thriving marine environment for generations to come; we can start to reverse the real damage and pain inflicted by the ruinous CFP on coastal communities.”

He added: “The decline of British fishing has come to symbolise the worst, most destructive consequences of our EU membership.

“It is vital that we use Brexit to free ourselves completely from its grasp and implement a bespoke policy tailored to the needs of the dynamic mixed fisheries which surround our shores.”

About a million tons of fish are discarded each year, an estimated 40 per cent of all those caught and worth £1.6bilion a year.

Mrs May insists the Chequers deal means Britain leaving the CFP. But under a deal agreed with Brussels earlier this year, the UK would remain bound by the bloc’s fisheries rules throughout the planned transition period which is set to run from exit day next March 29 to the end of 2020.