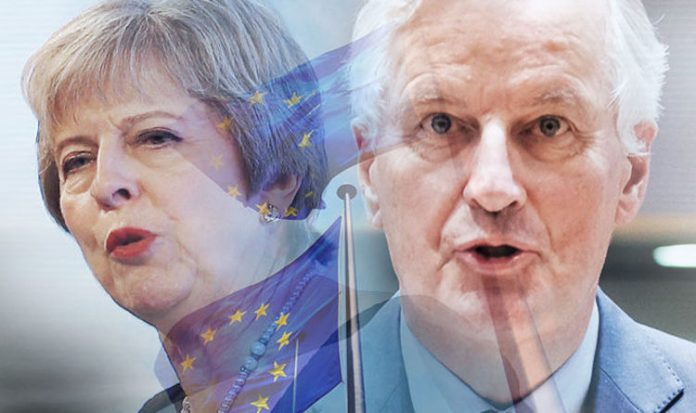 Mr Barnier, who yesterday briefed the EU General Affairs Council in Brussels, is now set to demand “credible” guarantees from Theresa May that any future deal could not be unpicked by one of her successors.

If the UK agrees to the demand it would undermine an important constitutional principle that a government cannot bind its successors’ hands and potentially leave Britain at the mercy of Brussels bureaucrats.

Mr Gove’s comments were an attempt to calm concerns by Brexiteers that the Chequers proposals will leave Britain as a “vassal state” to the EU effectively under its control in important areas such as trade and business regulations.

But a recently published account of a meeting of senior EU ambassadors last week suggests that Mr Barnier plans to demand that Britain is permanently tied to the deal with no room to negotiate.

According to reports, a note from the meeting said: “The commission said to be careful because it was not clear what ‘miracles’ UK constitutional law could allow.

“It would be possible that [the EU] accepted painful compromises to avoid a failure and then the UK would want to continue negotiating because suddenly it’s possible again.”

It is understood that Mr Barnier’s deputy, German official Sabine Weyand said: “We will need credible political promises from the UK.”

According to reports the French are most suspicious that British negotiators will want to reopen talks and intend to do this with a fudge over a political declaration over future trading.

However, Mr Barnier and French President Emmanuel Macron are up against European Council president Donald Tusk, Germany, Belgium and Poland who think there needs to be a “creative” political declaration to be more aspirational to get the deal agreed.

Mr Tusk said he wanted to avoid the “catastrophe” of a no-deal Brexit.

In a letter to EU leaders he said they should discuss arrangements for the “final phase” of the Brexit talks “including the possibility of calling another European Council in November”.

He said the EU leaders should also reconfirm the need for a “legally operational backstop” on Ireland to avoid a hard border.

Mr Tusk added that leaders should work on “limiting the damage” caused by Brexit.

“Unfortunately, a no-deal scenario is still quite possible. But if we all act responsibly, we can avoid a catastrophe.”

Mr Barnier is due to give a press conference following a Special European general affairs council on Brexit in Brussels at 9pm.