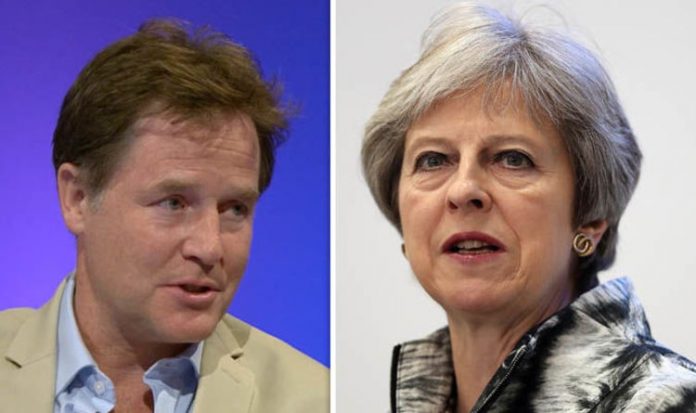 Speaking on BBC Newsnight, the former deputy prime minister criticised the Government’s progress on the UK’s Brexit Customs Bill and warned that the proposed “facilitated customs arrangement” would not be accepted by European Union negotiators.

He said: “One shouldn’t devote too much energy and attention to all the endless twists and turns to these amendments, because this is a Government that now is in an outright state of degeneration.

The former politician warned the Customs Bill will be rejected by Brussels officials regardless of the last-minute amendments added to the bill by the European Research Group Chairman Jacob Rees-Mogg.

He said: “Secondly, the EU won’t accept the Chequers deal, molested by Jacob Rees-Mogg’s amendments or not.”

READ  Who is Frank Field - Why has he quit the Labour party after Corbyn controversy? | Politics | News - UK

Mr Clegg also took direct aim at Mrs May’s customs model, stating: “I know for a fact Government negotiators have been told that this ‘facilitated customs arrangement’, or whatever bogus title they apply to it, simply will not be accepted by EU negotiators.

“And the British negotiators have been told that some time ago.”

The former politician branded Mrs May’s proposal “ludicrous”, and stated the remaining EU member states would never accept the deal as it would require the UK, a third country, to collect tariffs on behalf of the EU and to send them back to Brussels.

He said: “No one can reasonably expect that the EU27 should remit to a third country the essential vital task of policing its external commercial border and collecting taxes which don’t belong to us to then send them onwards to Brussels.

Mrs May was accused of bowing to Brexiteer demands on Monday after agreeing to a series of amendments put forward by Jacob Rees-Mogg and his 80-strong European Research Group in fear of an embarrassing defeat in the House of Commons.

The Prime Minister narrowly saw off a defeat to the amendment after MPs voted 305 to 302 in support of the proposal.

The amendment, which was tabled by former minister Priti Patel, stipulates the UK would stop collecting tariffs for EU nations at the border following Brexit unless there is reciprocal arrangement.

Mr Clegg also raised fears over the time pressure of the current Brexit negotiations, and warned that MPs lacked sufficient time to produce a coherent package by October or the final Brexit deadline on March 29 next year.

He instead called for an extension to the Brexit deadline to offer MPs time to develop a comprehensive plan in a “grown up and calm way”.

In a damning conclusion, he said: “There is absolutely no way that this huge momentous decision, which will have profound impacts on nearly every aspect of British public life for years to come, can be done under this frenzy and hysteria and undue haste of this compressed timetable.”