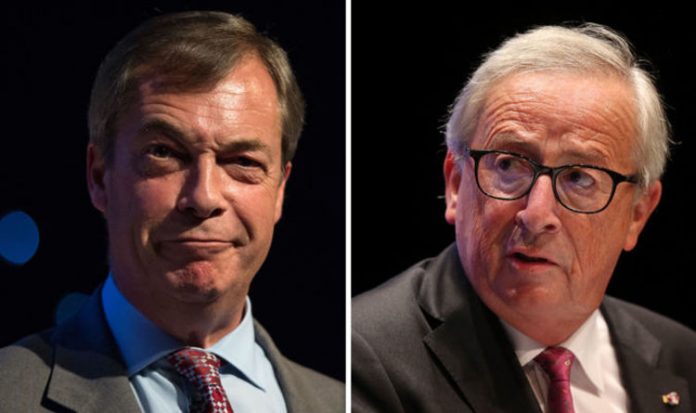 The former UKIP leader, sharing a platform with former Brexit secretary David Davis and Labour Brexiteer MP Kate Hoey, said it is time the UK’s own politicians “began to feel the heat” over attempts to overturn the referendum vote.

Mr Farage was speaking before 1,000 cheering supporters at the first Leave Means Leave rally in Bolton.

To cheers and applause, the “gangsters” and “bully boys” of the EU were told to “read some history books” about how Britain reacts “when we are up against it”.

The leading Brexiteer said: “They are a bunch of gangsters. We will explain a free trade deal is possible, if that’s what the gangsters in Brussels want.

“If they don’t, that is fine, if they don’t we will leave with no deal. No deal, no problem.

“I think it’s about time that our elected politicians began to feel the heat over the extent of the betrayal.”

Mr Farage said out-of-touch “career politicians” do not want to respect the referendum vote to leave the EU and a renewed, cross-party campaign was needed to stay on course for Brexit and counter the “negative” narrative in the media.

The Brexiteer told supporters to “queue up outside the constituency offices” of MPs to tell them to deliver Brexit.

He continued: “It is my first day back on the political stage. Today is the re-launch, today is the rebirth of the people’s army that gave us Brexit.”

Mr Farage said Prime Minister Theresa May’s Chequers plan for Brexit was “dead” following the debacle in Salzburg when EU leaders told her it was unworkable.

He said the plan was “Brexit in name only” and while not Mrs May’s “biggest fan”, he berated the EU on how she was treated.

Mr Farage added: “I will be damned if we should allow foreign, unelected bureaucrats to treat our Prime Minister like that.”

The UK Government’s plan for Brexit was agreed by the Cabinet at the Prime Minister’s country residence, Chequers, on July 6.

Theresa May has insisted it is the only possible Brexit she is offering.

But many Brexiteers have dismissed the plans, saying she betrayed the original pledges made during her Mansion House speech in March.

The plans prompted Mr Davis to resign from the Cabinet.

Mr Davis said the plan was a “fudge” but told the rally he viewed the treatment of Mrs May “with contempt” and said “bad manners and discourtesy are not the hallmarks of great men”.