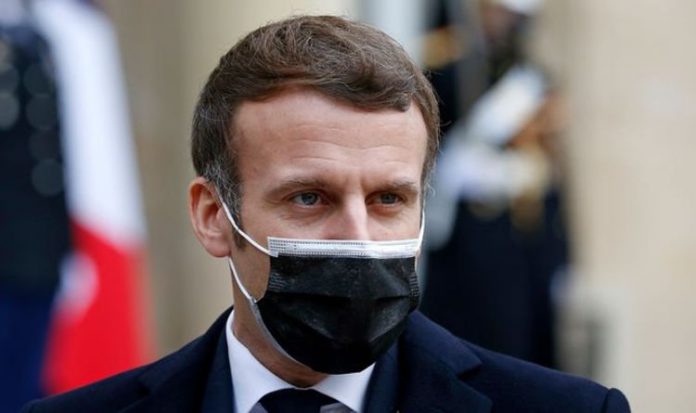 The Brexit Party leader posted a screenshot from shipping trafficking site marinetraffic.com indicating the vessel was off the coast of Kent. On Tuesday the French Government imposed a travel ban on the UK following the discovery of a new more infectious strain of coronavirus in south-east England.

Following talks with the British Government it has since decided to reopen the border for freight drivers and EU citizens, provided they can provide a negative coronavirus test.

Trade talks between the UK and EU are currently at a critical stage with just days to agree a new deal before the Brexit transition period expires.

On Twitter Mr Farage commented: “A French Warship in English waters just a few hours ago.

“Looks like Emmanuel Macron is still flexing his muscles?”

This was accompanied by screenshots from marinetraffic.com purportedly showing the vessel travelling off the coast of Dover.

They indicate the ship was travelling at 7.2 knots and was “Underway using engine” at 15:51 on Tuesday afternoon.

France, a fellow NATO member, is one of the UK’s closest military partners.

Mr Farage has accused the Government of making too many concessions during Brexit negotiations and called for a no deal Brexit.

“Too often, he wobbles like a jelly. This time, he must be as solid as a rock.”

Whilst Britain officially left the EU in January it remains in a Brexit transition period until the end of this year.

During this time the UK is continuing to pay into the EU budget in return for continued access to the European single market.

Currently the Government is attempting to negotiate a new trade agreement to replace this in 2021.

However, talks remain stalled over the EU’s demands for continued access to Britain’s fishing waters and for the UK to stay tied to its ‘level playing field’ regulatory network.

One user tweeted: “Why did the Royal Navy not escort it out of our waters?”

However another added: “Nigel best pipe down mate.

“They are in the separation scheme – ships transiting Dover Strait to the west are on the English side and those transiting to the East on the French.”

Express.co.uk has approached the French Embassy in London and Ministry of Defence for comment.