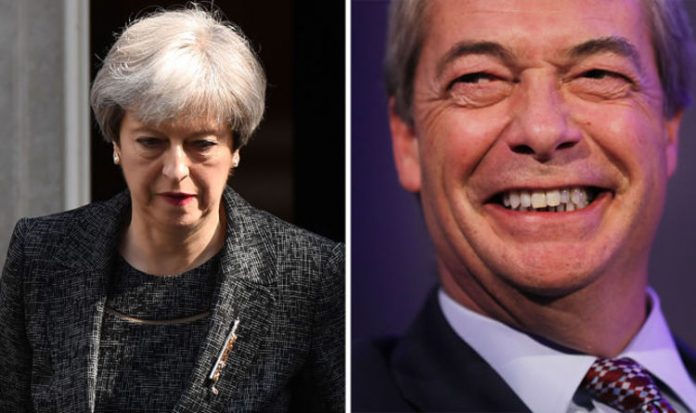 A BBC reporter quizzed him on his comments, saying: “You told me a week ago that you were quite enjoying your retirement.

“You were brown, you were looking fitter, you said this political game was behind me.

“Then on your programme LBC this week you say, ‘look, if this is the Brexit plan we’re going to get, I’m coming back and I’m going to lead UKIP again.’

To which the leading Brexiteer chuckled and said: “I was genuinely shocked by what came out of Chequers.

“I understand that in any negotiation there is a degree of give and take.

“But not complete, total, abject surrender, and frankly, a betrayal.”

The Chequers meeting revealed Mrs May’s Brexit plan which Brexiteers have blasted as a “soft” exit from the EU.

Mr Farage continued: “Betrayal is a very strong word, but a betrayal not only of how people voted in the referendum but of a General Election manifesto headed up by Theresa May herself.

“If we get to the spring of next year and Article 50 has been suspended or if this betrayal has continued, then yes, I would seriously consider chucking myself back into the frontline of this.

The Cabinet supported the Prime Minister’s “third way” model for the future customs arrangement with the EU following Brexit.

Trump said Mrs May’s proposals would “probably kill” a trade deal with the US.