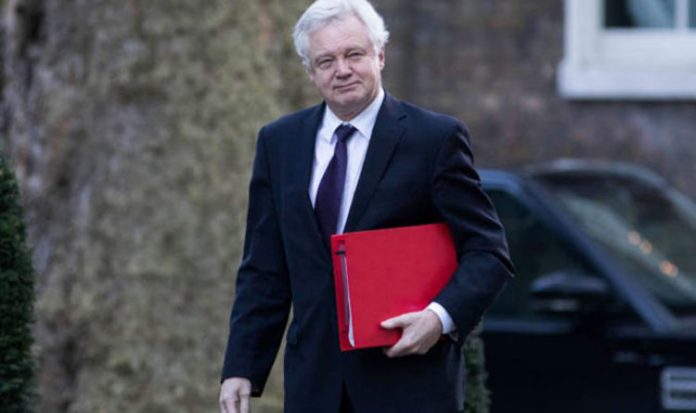 Mr Davis could back an amendment that would force a commitment that there will be no customs border down the Irish Sea.

It is one of the four amendments that have been tabled by Eurosceptics on the Government’s main trade bill.

The amendments were tabled in a bid to block the Prime Minister’s Chequer’s compromise.

The four amendments tabled by Jacob Rees-Mogg and other leading Eurosceptics include demands for the UK to abandon its pledge to collect taxes on behalf of the EU unless it does the same.

Other amendments would force the Government to commit to have a separate VAT regime from the EU and force Mrs May to prioritise legislation if she wants Britain to stay in the Customs Union.

It the Government accepts the amendment on the customs border and Ireland, then the Eurosceptics may withdraw the other amendments and it would avoid a mass rebellion.

Yesterday the Prime Minister invited “softer” Eurosceptics to her another Chequers retreat after her press conference with Donald Trump.

Brexiteers believe Mrs May is trying to divide Eurosceptics to prevent a mass rebellion on Monday.

The Government is also facing a rebellion on another front from pro-European Tory MPs who want to see the UK stay in the Customs Union.

When Mr Davis quit last Sunday night in a shock resignation he said that Mrs May’s Chequers compromise would leave the UK in a “weak negotiating position”.

In Mr Davis’s official resignation letter, he said: “The national interest requires a Secretary of State in my department that is an enthusiastic believer in your approach, and not merely a reluctant conscript.

“While I have been grateful to you for the opportunity to serve, it is with great regret that I tender my resignation from the Cabinet with immediate effect.”

He stated that the current direction of Brexit policy would leave the UK in “at best a weak negotiating position, and possibly an inescapable one”.