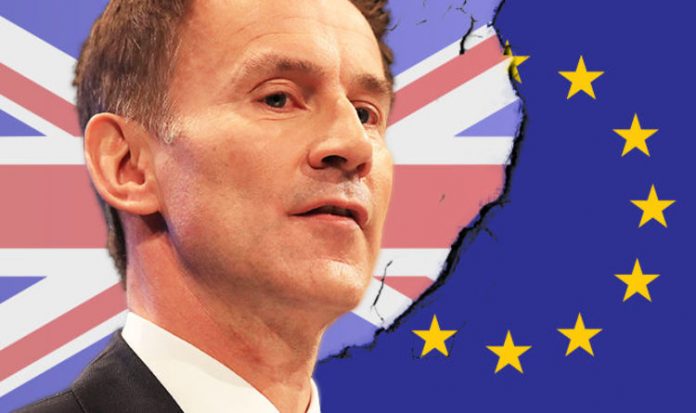 Speaking at the US Institute for Peace in Washington to mark his three-day visit to the US, Mr Hunt delivered a speech stressing the importance of strong alliances.

Mr Hunt said: “European unity will be chaotic in a no-deal Brexit.

“Britain will find a way to prosper and we will always be a dependable ally.

“But a messy divorce will result in a fissure of relations that will take a lifetime to heal.

“All of us, the US, EU and UK have strategic choices to make that will have a profound impact.”

Mrs Thatcher said: “It is in a country’s interests to keep faith with its allies. States in this sense are like people. If you have a reputation for exacting favours and not returning them, the favours dry up.”

Mr Hunt’s warning comes as ministers are attempting to hammer out a deal in time for an EU summit in Brussels in October.

Brexit Secretary Dominic Raab is expected to deliver a major speech on the negotiations later this week and the Government is scheduled to begin releasing a series of more than 80 technical documents setting out preparations needed in case the talks collapse without a deal.

He said: “We are working constructively and at full speed 24/7, seven days a week to reach an agreement.

“Our chief negotiator has been engaging constructively as he has always done with his British counterpart and it’s in that spirit that the meeting tomorrow will take place.”

Mr Hunt said while speaking on the Today Programme that the bloc wants to give Britain a good deal, but are worried other countries will follow suit as a result.

He said: “In their hearts, they want to give Britain a good deal because they know how important we have been for the security and prosperity of Europe in the post-war period.

“But in their heads, they are worried that if they give us a good deal, other countries will follow suit.

“What I say to them is if you are thinking about this logically with your head as opposed as your heart then also recognise that the consequences of an acrimonious, messy divorce, would be terrible for the EU project as well.”

“I made it clear that I think Britain would survive, would prosper, whatever the outcome of these talks. But it would also be a geo-strategic mistake for the continent of Europe.