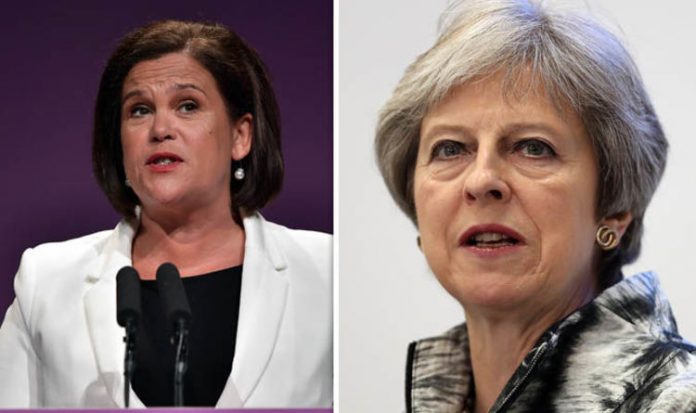 Ahead of Theresa May’s visit to the Irish border today, Sinn Fein, the SDLP, the Alliance Party and Green Party urged No10 to step up its game on the Irish issue.

In a harsh joint statement on Brexit, they expressed their concern over the lack of “any tangible progress” on a range of matters, setting out a list of topics they want to see the negotiators deal with in the foreseeable future.

The parties’ worry is that, after Brexit, Northern Ireland’s residents will see themselves deprived of a series of rights they can now enjoy through the Republic of Ireland and the European Union.

Among them there are the continued access to third-level study available to EU students and the European Health Insurance Card.

READ  A-level triple lock: What is the triple lock system and how does it work? | UK | News (Reports)

The parties also asked to see the continued provision for cross-border health services in Ireland – such as the Northwest Cancer Centre in Londonderry and the Children’s Heart Centre in Dublin – and safeguards for European Economic Area migrant workers in Northern Ireland.

Pointing out the EU and the UK said in December no diminution of rights on the Irish island would be enforced but have yet to write it down in an agreement, they said: “We are at a crucial point in the Brexit negotiations.

“Guarantees were given in the Joint Report between the British Government and the EU in December that there would be no diminution of rights as a result of Brexit, on the rights of people resident here and that the Good Friday Agreement would be protected.

“These guarantees have yet to be fully translated into legally binding text and reflected in the Draft Protocol on Ireland/Northern Ireland.

“Significant areas of concern remain, and there is little sign of any tangible progress on a range of important matters.”

The parties, which first joined forces on the Brexit issue in May, urged ”further dialogue” to ensure the deal “faithfully reflects and translates into law all rights and equality commitments made in the first phase of the negotiations”.

The four parties argued No10 is backing the desires of government ally and Brexit-backing DUP rather than listen to what people in Northern Ireland, where Remain won with 56 percent of preferences, want.

These demands come ahead of Prime Minister Theresa May’s trip to the Irish border, her first journey there since the Brexit referendum.

During the visit, taking place between Thursday and Friday, Mrs May will meet business representatives on the Northern Ireland side of the border and deliver a speech in Belfast where she will outline her vision of Brexit.