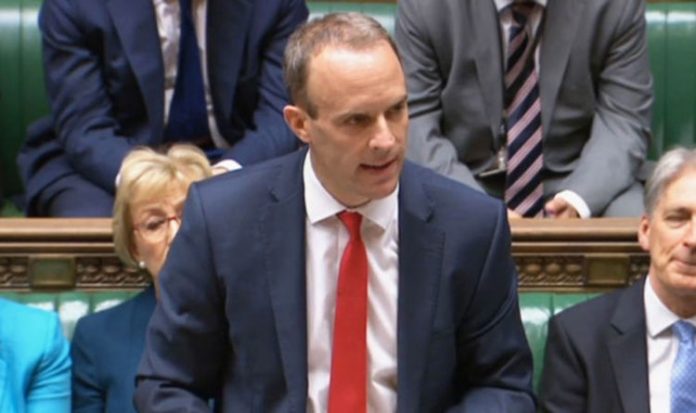 Mr Raab, who replaced David Davis as Brexit Secretary last week, will take questions from MPs in the House of Commons chamber.

His appearance comes following reports the EU wants to delay Brexit in a desperate bid to avoid a no-deal Brexit.

Negotations in Brussels have reached an impasse following disputes between the EU and UK over the future of the irish border.

One MEP said last night: “There has been serious talk of extending Article 50, and all the EU-27 are prepared to do it.”

A second MEP added: “That thought has been going around for some time.

“It will probably only happen if the negotiations are so advanced that the EU believes a deal can be struck.”

After the Commons session, Mr Rabb will head to Brussels for crunch talks with the EU’s chief Brexit negotiator Michel Barnier.

Mr Jones urged the Government to “look at the proposals again” and said they may have to be replaced with a Canada-style free trade deal.

She added: “I think the Prime Minister has shown herself to be extremely resilient and also open to debate over the last two years.

“I think she is also a realist and I think that, when she analyses the impact of this week’s vote upon the the White Paper, she will want to engage in a debate within the party.”

Mr Jones said UK and EU preparations for a no-deal Brexit were “quite belated”, adding: “I think it should have been done some considerable time ago.”