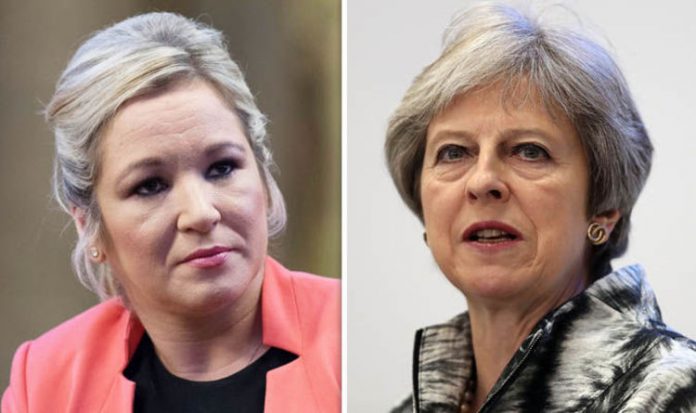 Sinn Fein, the SDLP, the Alliance Party and the Green Party expressed their concerns that key promises on continued access had not yet been fully met.

In the joint statement, the parties said: “We are at a crucial point in the Brexit negotiations.

“Guarantees were given in the Joint Report between the British Government and the EU in December that there would be no diminution of rights as a result of Brexit, on the rights of people resident here and that the Good Friday Agreement would be protected.”

In a direct attack on the Government, the parties accused Mrs May of not translating these promises into the official withdrawal agreement.

They said: “These guarantees have yet to be fully translated into legally binding text and reflected in the Draft Protocol on Ireland/Northern Ireland.

“Significant areas of concern remain, and there is little sign of any tangible progress on a range of important matters.”

The parties have called on Mrs May to secure a deal that “faithfully reflects and translates into law all rights and equality commitments made in the first phase of the negotiations”.

Among the parties’ key concerns in continued access to university education for EU students, safeguards for European Economic Area migrants workers in Northern Ireland and access to the European Health Insurance card.

The parties have also called for the continued provision of healthcare services in Ireland, including the Children’s Heart Centre in Dublin and Northwest Cancer Centre in Londonderry.

Mrs May has been criticised on numerous occasions for not considering carefully enough the concerns of individuals living in the vicinity of the Irish border.

The Prime Minister is due to visit Northern Ireland for a two-day visit today, during which she will visit the border and meet with affected businesses.

Commenting on the ongoing Irish border issue, she said: “I fully recognise how their livelihoods, families and friends rely on the ability to move freely across the border to trade, live and work on a daily basis.

“That’s why we have ruled out any kind of hard border.

“Daily journeys will continue to be seamless and there will be no checks or infrastructure at the border to get in the way of this.”

Mrs May’s Brexit White Paper finalised at Chequers vows to maintain a frictionless border in Ireland through a ‘facilitated customs arrangement’, which would involve the UK collecting tariffs on behalf of the EU.

The Prime Minister also plans to meet with representatives from Sinn Fein and the DUP at Stormomt to discuss power-sharing and the ongoing deadlock in the devolved administration.

Northern Ireland has been without a devolved administration since January 2017.