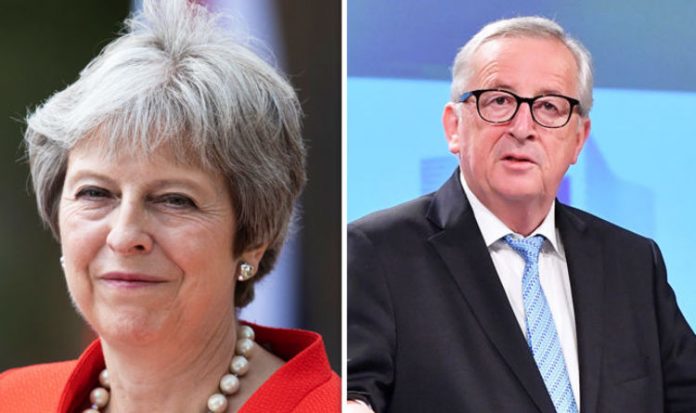 Brussels chiefs suggested the move in a desperate bid to avoid a no-deal Brexit.

They fear the UK and EU will fail to strike a workable agreement within the current time limit as Brexit talks continue to falter.

British negotiators have repeatedly clashed with Brussels over the Irish border issue and the cost of the UK’s exit bill.

One MEP said last night: “There has been serious talk of extending Article 50, and all the EU-27 are prepared to do it.”

But the MEP insisted Brussels “doesn’t want to stop Brexit” and said the deadline would only be extended for a short period of time.

A second MEP added: “That thought has been going around for some time.

“It will probably only happen if the negotiations are so advanced that the EU believes a deal can be struck.”

The European Parliament is wary about dragging out Brexit negotiations for too long because its own elections next summer.

He said: “While I lose my job, it would be a total betrayal of faith by our government to extend Article 50 and to extend the term of MEPs.

“Leaving the EU institutions will be the only symbol of Brexit delivered on 29 March next year.

“We must rule this out as soon as possible.”

Fellow Tory MEP Syed Kamall added: “We’ve heard some rumours about this in recent weeks, due to concerns about the perceived impasse.

“But the UK Government sees the Brexit white paper as a significant step towards unlocking the negotiations.

“Talk of extending Article 50 at this stage seems premature.”

And a Brussels source told City AM: “Extending the deadline sets the precedent that you can vote Leave but never actually leave.

“It mocks the whole Article 50 process.”

Earlier this week, former deputy prime minister Nick Clegg revealed Brussels was preparing for the possibility of a delayed Brexit.

He said: “There has already been considerable preparation behind closed doors in Brussels for a delay, including on the tricky issue of how to navigate European Parliament elections next summer.

“Sebastian Kurz, the Austrian chancellor currently chairing the presidency of the European Council, has publicly and privately mused about the need for delay.

“It would be easy to administer procedurally, since no major member state would object.”