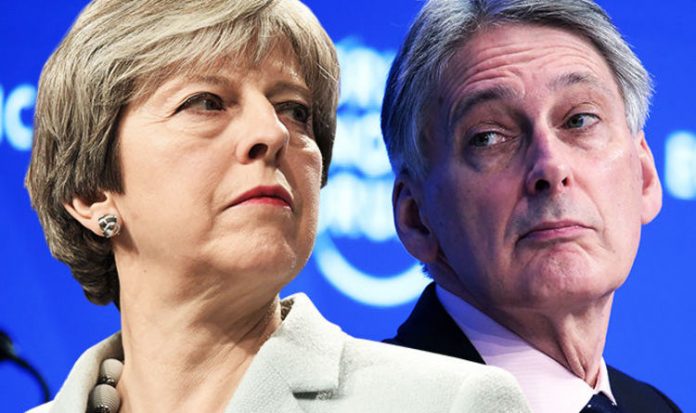 It is the second time the Chancellor has been upbraided this week after he was called out by the Chief Whip, Julian Smith, for his “unhelpful” language.

Mr Hammond was taking part in an epic three and a half hour Cabinet meeting on Thursday when he suggested Britain may need to remain a member of the EU beyond March 29 next year.

He said this would give the government time to pass a barrel of new laws in an emergency scenario which would be crucial if Britain leaves the EU with no deal.

Mr Hammond pointed out the Government has the power to push back the date of Brexit day.

But the Chancellor’s suggestion was immediately slapped down by Theresa May, who told him it was not going to happen.

The Chief Whip also shot it down, arguing the government would get all the necessary legislation through on time.

Nobody present backed Mr Hammond in the Cabinet meeting.

Senior figures sympathetic to the Chancellor have said his statement has been misunderstood.

A source close to Mr Hammond said: “Philip was only talking about an administrative pause of a few weeks”.

No 10 sources said is “zero chance” of Brexit being postponed beyond March 29, 2019, the Sun reports.

And Mrs May herself has repeatedly said Britain will be leaving the EU on March 29.

It is not the first time this week the Chancellor, who was a Remain supporter, has clashed with his cabinet colleagues over Brexit.

On Tuesday Mr Hammond was picked up on his language by the Chief Whip after saying there would be a lot of “squealing” among Tory MPs over Universal Credit.

Mr Smith told Mr Hammond that talking about “squealing” was not helpful.

A Conservative party source has also revealed Mr Hammond is aware of how many Tory MPs are concerned about Universal Credit.

Universal credit is a benefits system aimed at reducing complexity but has led to claimants waiting up to six weeks before people are paid – three times as long as the older system.

Critics have said Mr Hammond’s position on key policy issues is damaging for Theresa May.

In August he released a letter warning that a no-deal Brexit could increase government borrowing by £80bn a year over the next decade.

Mr Hammond’s gloomy predictions emerged only hours after the Government released documents claiming the UK can cope with a no-deal scenario.