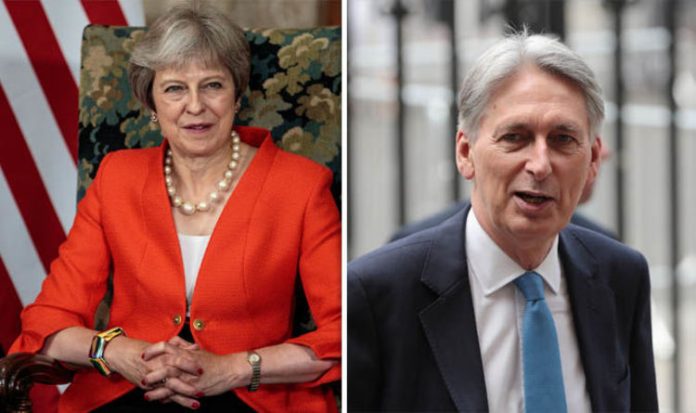 The Chancellor said the proposals set out in the White Paper will allow the sector “to flourish”.

However, Catherine Guinness, policy chair of the City of London Corporation, said the proposal was “a real blow for the UK’s financial and related professional services sector”.

Carolyn Fairbairn, the head of CBI said she was worried about the impact the arrangement would have on services such as insurance.

She said: “Businesses on both sides have been asking for frictionless trade between the UK and EU, and shared rules could go a long way towards delivering that. It is now the EU’s turn to put economics before ideology on these proposals.

“But there are gaps in these proposals and more detail is needed on EU VAT, some services sectors and the new customs system. It will be a make or break summer.

“It’s vitally important UK negotiators get their heads down and work with businesses to grapple with the detail and get it right.”

Jacob Rees-Mogg has also been outspoken about the White Paper.

The Eurosceptic Tory MP has said this current plan was “the greatest vassalage since King John paid homage to Phillip II at Le Goutlet in 1200”.

Writing in the Financial Times Mr Hammond defended the White Paper saying it “provides sufficient stability and certainty for the market to operate”.

He added: “We must work with our EU neighbours on a pragmatic solution to preserve the mutual benefits of integrated markets while addressing the sovereignty concerns of both sides.”

Mr Hammond said that our financial regulatory frameworks are already identical and said that going forward he was supporting a bilateral agreement between the UK and the EU.

He said: “This arrangement would have at its heart a bilateral agreement between the UK and the EU, defining how the relationship will be managed.

“It would ensure that any changes to equivalence decisions are preceded by appropriate dialogue and follow an agreed process for implementation, so the City of London has a solid basis on which to make long-term plans.

“And it would give both sides the most effective tools to maintain compatible rules over time, while retaining our sovereignty.”

Mr Hammond reinforced that this proposal would work for the UK, the EU and for business as it is now up to the EU “to engage with us”.