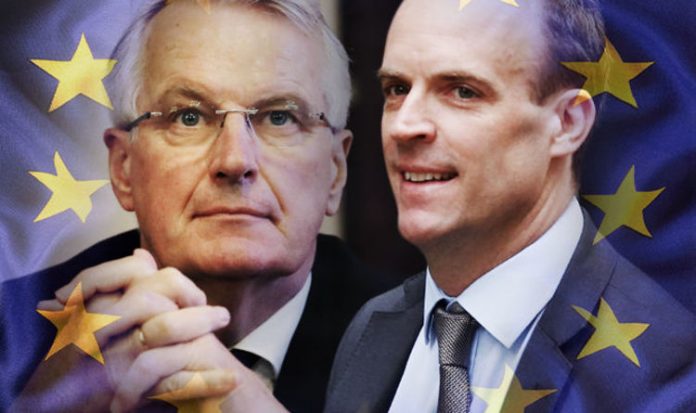 Mr Raab faces an uphill challenge to convince his already sceptical European Union counterparts to adopt the Prime Minister’s white paper, which has already caused a Government meltdown in Westminster.

Having replaced David Davis, who only spent four hours in the Belgian capital this year, Mr Raab will be eagerly anticipated by Mr Barnier in the hope of accelerating negotiations in order to complete the withdrawal agreement in time for the October deadline.

On Monday, negotiators will discuss the Irish border, future relationship and the final withdrawal agreement issues. The talks are followed by two days of further discussions in a bid to conclude the remaining 20 percent of Britain’s exit.

Mrs May faces an uphill challenge to win over Brussels into accept her white paper plan – which has already sent Westminster into chaos – after a number of reservations from member states.

EU leaders have been told to not go public with any criticisms of the plan as the bloc fears any hint of rejection would significantly increase the possibility of a no deal Brexit.

A new internal EU document has once again warned member states, companies and stakeholders to step up their preparations for a no deal Brexit.

The 15-page draft document strongly urges the EU’s remaining 27 members to increase its contingency planning in preparation for the UK leaving the bloc without a deal in March.

The European Commission document reads: “Drawing up contingency plans for the worst possible outcome is not a sign of mistrust in the negotiations.

“The Commission hopes for an agreement and devotes very significant resources and committed efforts to achieve this goal. Negotiations, on the other hand. can fail.”

The document notes a number of issues in the withdrawal agreement remain “still unresolved”.

On the Irish border, it reads: “No progress has been made in agreeing a ‘backstop’ to avoid, independently of the outcome of the negotiations of the future partnership, a hard border on the island of Ireland.”

The document was drawn up as part of Martin Selmayr’s no deal “preparedness” team inside the Commission.

They have already briefed MEPs about new Irish shipping routes and the requirement to add Britain to either the “visa-required” or “visa-free” lists in the even of Britain crashing out of the EU without a deal.

Britain is also increasing its no deal preparation with the Department for Exiting the EU having a renewed focus on the eventuality of a no deal exit.

At the Chequers summit, Brexiteers urged the Prime minister to allow no deal preparations to become more visible than previous in return for agreeing to her soft Brexit plan.

A whitehall official said: “Michael Gove was one of several ministers who accepted that the UK should try and reach a deal with Brussels on a plan for a softer Brexit.

“But the quid pro quo was that this had to be accompanied by a more convincing threat that the UK could walk away from the talks if the EU refuses to play ball.”