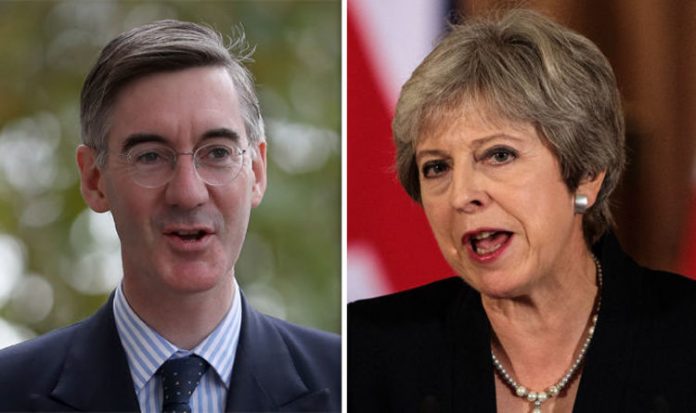 The Prime Minister blasted the EU today for “making a mockery” of the UK during Brexit negotiations after Brussels bosses rejected her Chequers plan in Salzburg yesterday.

Mrs May said “despite progress we have made” there are two big issues which “remain a long way apart”.

She said she would not compromise on the promises made in the referendum by allowing Northern Ireland to remain in a customs union and she would not allow any deal which would risk the break up of the UK’s union, just as the EU would not jeopardize theirs.

Mrs May added: “No deal is better than a bad deal.”

Mr Rees-Mogg, chairman of the European Research Group, praised the Prime Minister, saying: “The Prime Minister has shown steely resolve at the eleventh hour and is standing up to EU bullies.

“Salzburg was a failure even though European leaders had been briefed about Chequers before it was greed by the Cabinet. It indicates that the EU is not acting in good faith. This makes the Prime Minister’s task harder and she is right to remind them that no deal is better than a bad deal.

“The Prime Minister is also right to protect the rights of people from EU member states living in this country regardless of whether there is a deal.

“Likewise her determination not to erect barriers between Northern Ireland and the Irish Republic is sensible and something many have previously suggested.

“The tone is strong and forthright and shows confidence in the UK’s future.”

But while he went on to praise Mrs May, he also said Chequers cannot work, adding: “However, there is still no reason to suppose that Chequers can work either for the UK or the EU.”

Mr Tusk insisted the other 27 leaders “all agreed” that her Chequers plans would not work.

The pound fell 1.2 percent against the dollar after Theresa May said the UK and EU were at an “impasse”.

Mrs May blasted Mr Tusk, saying: “Yesterday Donald Tusk said our proposals would undermine the single market. He didn’t explain how in any detail or make any counter-proposal. So we are at an impasse.

“The second issue is connected to the first. We both agree that the Withdrawal Agreement needs to include a backstop to ensure that if there’s a delay in implementing our new relationship, there still won’t be a hard border between Ireland and Northern Ireland.

“But the EU is proposing to achieve this by effectively keeping Northern Ireland in the Customs Union.

“As I have already said, that is unacceptable. We will never agree to it. It would mean breaking up our country.

“As I told EU leaders, neither side should demand the unacceptable of the other.”

The speech at 10 Downing Street comes after a chaotic day at the EU heads of state summit in Salzburg, Austria, yesterday.

Mrs May has just nine days to prepare for the Tory Party conference in Birmingham where she can expect another tough ride.