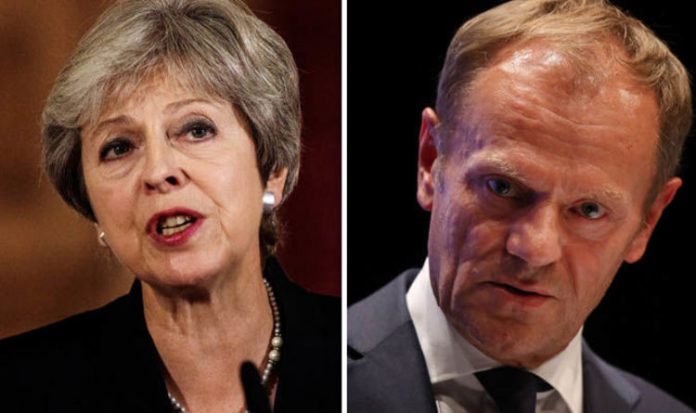 The Prime Minister said today talks were at deadlock as the bloc’s leaders were intent on keeping Northern Ireland in the customs union.

In her hardline statement outside Downing Street, Theresa May warned Brussels “no deal is better than a bad deal” and any proposal to keep Northern Ireland in the customs union was “unacceptable”.

“If the EU believe I will, they are making a fundamental mistake.

“Anything which fails to respect the referendum or which effectively divides our country in two would be a bad deal and I have always said no deal is better than a bad deal.”

Is the UK headed for a no deal?

The UK’s deadline for leaving the EU is on March 29, 2019 and this week’s breakdown in Brexit talks will only increase the threat of a no deal becoming reality.

Mrs May admitted discussions were at an “impasse” and the EU now need to make movements towards a compromise to avoid a no deal.

She said: “So we now need to hear from the EU what the real issues are and what their alternative is so that we can discuss them. Until we do, we cannot make progress.

“In the meantime, we must and will continue the work of preparing ourselves for no deal.”

With Brexit plans looking in disarray, bookmakers Betfair say the chances of the UK crashing out of the EU without a deal in March are now 6/4.

However, Mrs May also insisted while the two sides “remain a long way apart” the UK will “stand ready” for open negotiations.

Earlier, Irish Prime Minister Leo Varadkar insisted a deal could still be struck but negotiations were set to enter a “rocky patch over the next couple of weeks”.

But European Council Donald Tusk said all 27 leaders had “all agreed” the Chequers plan was not viable.

What is the Chequers deal?

Under the deal, MR May said she wanted to create a UK-EU free trade area with a “common rulebook” that would in effect stop friction at the border with Northern Ireland.

A “facilitated customs arrangement” would avoid a hard Irish border but allow the UK to negotiate its own tariffs outside of the EU.

But Mrs May said Donald Tusk has rejected the plans without outlining counter proposal, saying they “would undermine the single market”.

The pound fair sharply following the Prime Minister’s speech to $1.3, over fears the UK will exit next March with a no deal.

He said: ”The Tories have spent more time arguing among themselves than negotiating with the EU.

“The political games from both the EU and our government need to end because no deal is not an option.”