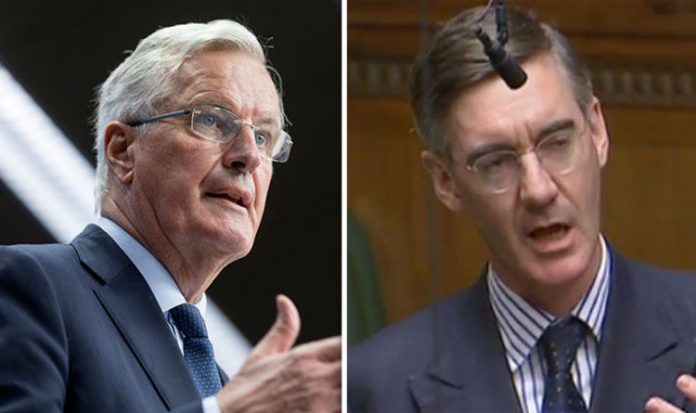 The European Research Group Chair railed against current Brexit plans, set out by the Prime Minister’s Chequers deal, which means the UK will still come under the jurisdiction of the European Court of Justice throughout the 21 month transition period after the country formally leaves the EU in March.

During a passionate speech to the Commons on Monday, Mr Rees-Mogg told MPs that remaining under the jurisdiction of the ECJ throughout the transition period was “a great mistake” as the UK attempts to move away from what is seen as the restraints imposed by the European bloc.

The arch-Brexiteer was speaking during a debate in the Commons on legislating for the Withdrawal Agreement.

The Brexiteer politician said to the House: “Having a period of 21 months where our senior law cannot be stopped in this country, when our senior court is the European Court of Justice, is a great mistake and is a bit of the legislation that I for one will find it extremely difficult to vote for.”

He continued: “I for one will find it extremely difficult to vote for because there was another way.

“There is an alternative route to do it. And in terms of the court, what we do with our own court in relation to human rights challenges.

“If the domestic court decides, the Supreme Court, that a bit of primary legislation fails to meet the requirements of the Human Rights Act, there is a fast-tracked way of amending legislation.

Earlier in the debate, Mr Rees-Mogg quoted the UK’s youngest ever Prime Minister, Pitt the Younger: ‘we have saved ourselves via exertion and we will save Europe via our example’.

Mr Rees-Mogg said: “And that is something that we should always remember as we make this great exertion and worth and noble exertion.”

Veteran Eurosceptic Bill Cash said during the debate on Monday that “Europe was voting with its feet” against EU restrictions.

He said: “Looking around the whole of the European Union at the moment, whether it’s in Italy, or whether it’s most recently in Sweden, there are all sorts of countries, many of them, in fact, most of them are voting with their feet against this restriction on their right to make their own decisions on their own parliaments.”

The proposal includes plans to create a ”common rule book” – involving a free trade area with the EU on industrial and agricultural goods.

But Mrs May’s proposal is also hugely controversial because it could force the UK to accept rulings from the European Court of Justice (ECJ).

The Brexit plan has been heavily criticised by former Foreign Secretary Boris Johnson since the Tory MP for Uxbridge and South Ruislip resigned over the agreement in July.

The EU’s chief Brexit negotiator Michel Barnier has previously rejected Mrs May’s plans and ruled out any special economic relationship with the UK – claiming it would unravel the entire “European project”.

But in a shock U-turn, Mr Barnier told a forum in Slovenia on Monday it is “realistic” to expect a divorce deal with Britain in six to eight weeks – suggesting the divorce could be settled by the week beginning October 15 – just in time for the EU Summit on October 18.

The EU chief negotiator said: “I think that if we are realistic we are able to reach an agreement on the first stage of the negotiation, which is the Brexit treaty, within 6 or 8 weeks.

“Taking into account the time necessary for the ratification process, the House of Commons on one side, the European Parliament and the Council on the other side… We must reach an agreement before the beginning of November. I think it is possible.”