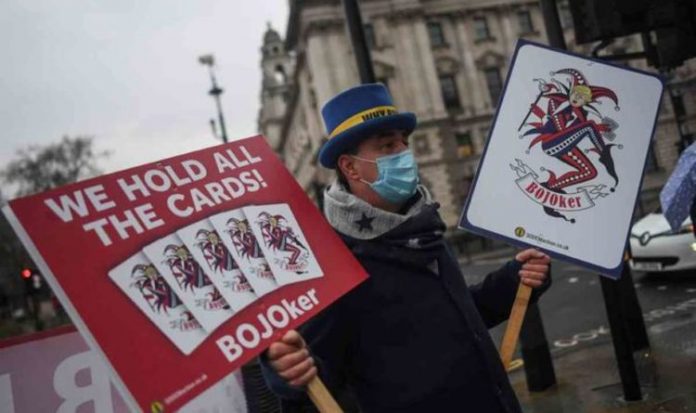 Campaign group Stand of Defiance European Movement (SODEM) has called for a united effort from all anti-Brexit groups across Britain. After Boris Johnson outlined the UK’s lockdown exit roadmap yesterday, desperate campaigners are wasting no time in restarting their calls for Britain to rejoin the EU. Group founder Steve Bray, known locally in Westminster as ‘Stop Brexit Steve’ due to his vocal protests outside Parliament, said the protests must be “relentless”.

Plans are afoot for a nationwide protest on the 5th anniversary of the referendum vote to decide Britain’s exit from the UK.

Mr Bray tweeted: “I’ve never called on all groups before but 23rd June 2021 is a Wednesday and Prime Ministers Questions the 1st with no restrictions and the 5th anniversary of the referendum.

“We need all-out protest at Parliament & across the UK against this corrupt government.

One follower of Mr Bray asked him to reschedule the protest to a Saturday saying, “Steve, we need a Saturday so we can all get there from all over the country”.

However, Me Bray responded and said: “It starts 23rd, it’s relentless, sustained and UK wide.

“It’s not a walk in the park march. It includes weekends.”

One follower of Mr Bray explained how anti-Brexit campaigners cannot rely on elections.

They said if “everyone and I mean everyone joined forces, especially all the actors, musicians, fishermen, truckdrivers, students, teachers, scientists, etc, and forced the UK Government to rejoin the EU urgently, it would be best for the entire UK”.

They added: “We can not rely on elections etc.”

Mr Bray said before the pandemic struck that he planned to stand “outside Parliament from 11 am to 6 pm every day that MPs are in session”.

The SODEM website explains that “anyone is welcome to join him, and every day they do.