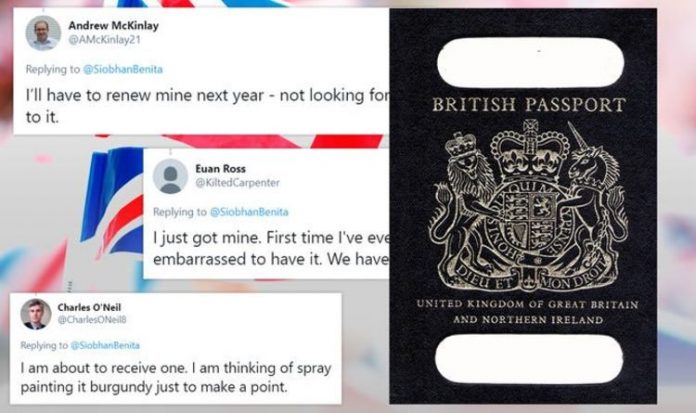 Following the UK’s vote to leave the European Union, new passports – which are based on the country’s traditional pre-EU passports – begun to arrive through people’s letterboxes. But a former civil servant has expressed disgust with her “black passport”.

Siobhan Benita, a former civil servant and a Rejoin the EU campaigner, tweeted a picture of her new passport and wrote: “My new black passport has just arrived.

“I will hate this document until the day it expires #BrexitShambles.”

Another Rejoiner tweeted: “I am about to receive one.

“I am thinking of spray painting it burgundy just to make a point.”

Other Rejoiners then took to social media to express hatred to their British passport.

Someone else has said they feel “ashamed and embarrassed” with the new passport.

They tweeted: “I just got mine.

“First time I’ve ever felt ashamed and embarrassed to have it.

“This is now a precious document, and anyone who has one is truly blessed and extremely lucky to have one.”

However, others lashed out at the Rejoiners, with many saying it is “downright” weird to be obsessed with a passport colour.

While Peter Lloyd, author of Stand By Your Manhood, said: “You’re all crazy.

“Seriously, get over it.

“Or, better still, live somewhere else.

“Britain does not need you.”

Another Brexiteer said: “In the 1980s, I had a black British passport.

“Loved it as a child. Looking forward to my current one expiring now.”

This argument erupted after people claimed the “blue passports” are not blue but instead black.

After the Home Office revealed the picture of the new passport colour, Craig Burston, senior lecturer in graphic design at the London College of Communication, said: “I’d say it’s black, if most people looked at this, they’d say it’s black.”

Blue passports were first introduced in Britain back in 1921 but were phased out after 1988 when members of the European Economic Community – now the EU – agreed to harmonise designs to a burgundy colour.