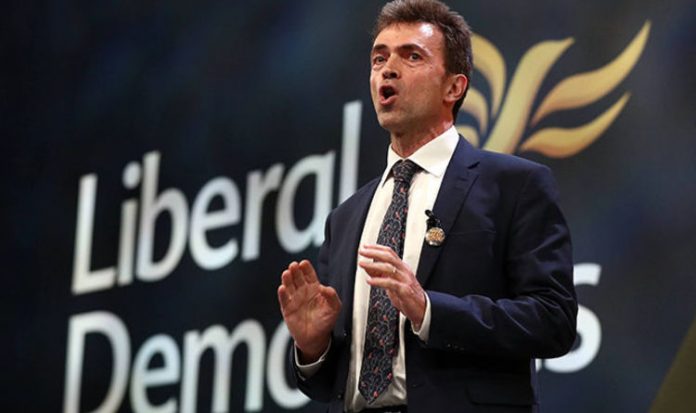 Mr Brake, who is the party’s Brexit spokesman, also told activists how cash earmarked for exit preparations could be used to regenerate towns and cities.

He said: “My vision of a better Britain is one that will be delivered by using the real Brexit dividend, the financial dividend liberated by cancelling Brexit, freeing up cash to boost skills, training, education, infrastructure, housing, productivity.

“If we secure a final say on the deal, and if the country backs remaining in the EU, we must pledge to use every penny of taxpayers’ hard earned money, such as the £3 billion earmarked for Brexit, to regenerate the towns, cities and communities in the greatest need.

“The money the Government are going to squander on more customs and border officers, building unnecessary infrastructure, duplicating badly the work of European agencies, will instead be used productively investing from Blackpool to Belfast East, Birkenhead to Boston, Banff and Buchan to Bridgend.”

Mr Brake, who was mistakenly introduced on stage as the “spokesperson for exiting the MP”, added: “Time is running out for Tory ministers who discretely share their concerns with fellow remainers in other parties, whilst publicly endorsing the Government line.

“You have to break cover too, abandon the ministerial limo, hand back your red box.

“Put the country’s interests first, as you did two years ago in the EU referendum campaign.”

It comes after it emerged Nick Clegg has recruited fellow ex-politicians Tony Blair and John Major in a Brexit plot to overturn democracy and keep the UK permanently shackled to Brussels indefinitely.

Mr Clegg has held meetings with an array of European leaders to try and persuade them to join forces and stop Brexit.

Mr Clegg told the Guardian: “The aim of the visits is to persuade EU leaders that British politics has made the option of remaining inside the EU viable.”