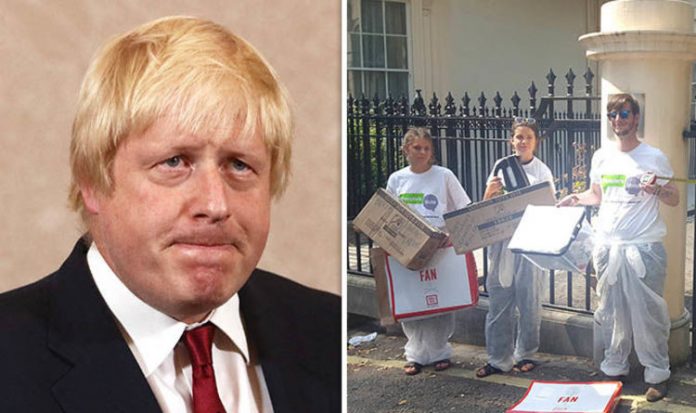 Campaigners from Our Future Our Choice (OFOC) and For our Future’s Sake (FFS) dressed as removal men and parked outside 1 Carlton Gardens in a van covered with the slogan “Leave Means Leave Removals Ltd”.

The protestors carried removal boxes labelled “Boris Johnson’s dream” and “Boris Johnson’s chances of becoming PM”, and rung the doorbell of the official residence, encouraging the former minister to move out.

Femi Oluwole, co-founder of OFOC, commented on the protest, stating: “We’ve come to Boris Johnson’s house who recently quit as Foreign Secretary, as he still thinks he can live in the Foreign Secretary’s house, which doesn’t really seem to make sense.

Mr Oluwole urged the pro-Leave MP to renounce his hard Breixt stance, and called for a “people’s vote” on the final Brexit deal.

He said: “We don’t need a discount Donald Trump stepping on the British people to get to Number 10. We need a People’s Vote.”

Richard Brooks, co-founder of FFS, also accused Mr Johnson of wanting to “have his cake and eat it”.

Commenting on the protest, he added: “We at FFS know how important leaving is to Boris so we’re here today to help him move it.

“We’ve got the van, the boxes, the bubble wrap and though we’re not quite the professional photographers he’s used to, we’ve got decent camera phones.

“Our futures are being screwed by Boris so we might as well get some clarity on his.”

A Foreign Office spokesman told Sky News that former ministers are expected to depart official residences “as quickly as practicable at the end of their tenure”.

However they noted that precise departure dates “take into account personal circumstances and family requirements”.

The former Foreign Secretary has nevertheless faced sharp criticism from political commentators, who have demanded he move out of the grace and favour property immediately.

Remoaner Alastair Campbell, former Downing Street director of communications in Tony Blair’s government, said: “It is not his house. It is a government residence. he is not in the government.

“The homeless on the streets round the corner have every bit as much right as he does to stay there.

“Charlatan. Utterly without shame or values.”

Mr Johnson resigned as Foreign Secretary in protest at Theresa May’s ‘soft’ Brexit deal which she finalised at the crunch Chequers summit in July.

Commenting on the compromise deal, he said: “Brexit should be about opportunity and hope.

“It should be a chance to do things differently, to be more nimble and dynamic, and to maximise the particular advantages of the UK as an open, outward-looking global economy.