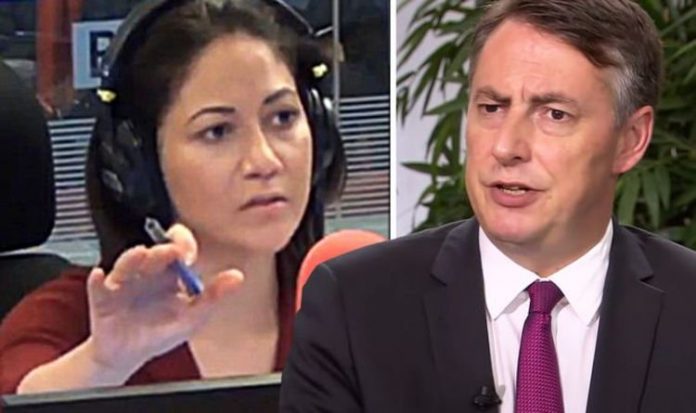 “The agreement on fisheries cannot be disconnected from the overall economic partnership.

“And what we’re saying is that this agreement should be balanced, sustainable and provide long-term arrangements.

“So the fisheries agreement from our point of view cannot be based on annual quota. That simply wouldn’t be able to be implemented.”

But the German MEP was quickly challenged by the BBC host who blasted: “Sorry, but why not?

“Norway does that every year!”

He replied: “Yes, but we’re talking about so many different fish species in all these British waters that most people who are engaged in the fishing industry say that this just wouldn’t be practical.

“It would be very heavily bureaucratic.”

It comes as the UK’s chief negotiator has called for “more realism” from the EU on the eve of crunch negotiations to broker a post-Brexit trade deal.

But talks were set for a collision course over new Brexit legislation which has dismayed senior EU figures, who are concerned it could override key elements of the Withdrawal Agreement.

Lord Frost said: “Today, I will sit down with Michel Barnier and drive home our clear message that we must make progress this week if we are to reach an agreement in time.

“We have now been talking for six months and can no longer afford to go over well-trodden ground.

“We need to see more realism from the EU about our status as an independent country.”

The Internal Market Bill to be tabled on Wednesday will ensure goods from Northern Ireland continue to have unfettered access to the UK market while making clear EU state aid rules, which will continue to apply in Northern Ireland, will not apply in the rest of the UK.

In addition, an amendment to the Finance Bill will give ministers the power to designate which goods going from Great Britain to Northern Ireland are considered “at risk” of entering the EU single market and are therefore liable to EU tariffs.