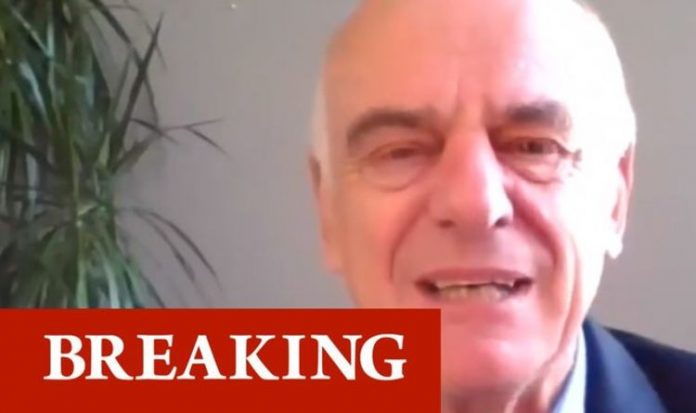 Dr David Nabarro has warned of further surges and spikes in coronavirus cases in the UK. There were a further 2,948 lab-confirmed cases of coronavirus in the UK as of 9am on Monday, following the 2,988 reported on Sunday, which was the largest daily figure since May. Speaking to Sky News, Dr Nabarro said: “I’m afraid it’s coming.

“I don’t like calling it a second wave, I just say there are going to be more spikes and surges of cases.

“Because the virus hasn’t changed. It’s the same virus that came and caused so much trouble earlier this year.

“It’s just been lurking. We’ve been very good at holding it back.

“But now as life gets going again, as young people go to university and there’s some movement around with holidays and work, I’m afraid it does mean the virus is going to come back.”

Professor Jonathan Van-Tam said on Monday that the public had “relaxed too much” over the summer and described the rising number of cases were of “great concern”.

The deputy chief medical officer for England issued the warning as Caerphilly in south Wales prepared to be placed under local lockdown and stricter measures were extended in Scotland.

In an interview with journalists, Prof Van-Tam said: “This is a big change. It’s now consistent over two days and it’s of great concern at this point.

“We’ve been able to relax a bit over the summer, the disease levels have been really quite low in the UK through the summer but these latest figures really show us that much as people might like to say ‘oh well it’s gone away’ – this hasn’t gone away.

He urged politicians and public health officials to think how to manage the crisis not in the short term but through “the next six months and how we get through this until the spring”.

The professor added that it was “clear” that the level of compliance with restrictions “is very variable indeed”.

Health Secretary Matt Hancock welcomed the “important advice” having earlier described the recent increase in cases as “concerning” as he tried to remind young people of the dangers of the situation.

“Don’t kill your gran by catching coronavirus and then passing it on,” he told told BBC Radio 1’s Newsbeat.