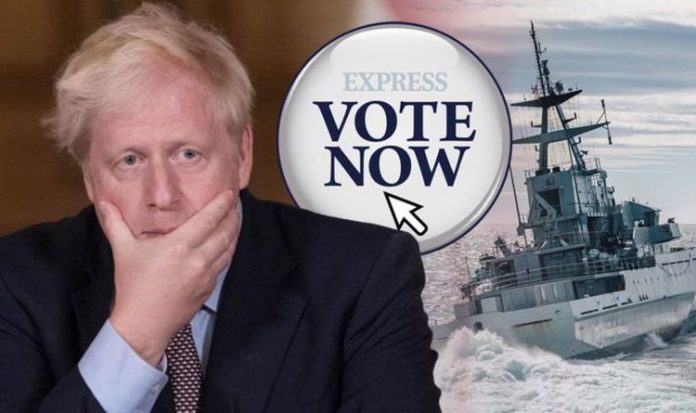 And with the Ministry of Defence now having committed to tasking four vessels to police the English Channel, today Express.co.uk is asking: “Is Boris Johnson right to commit resources to keeping French fishermen out of British waters?” The issue of fishing is central to Brexit, and French fishermen reliant on the seas around the UK for their livelihood are furious at the prospect of being prevented from doing so.

The situation raises the prospect of possible skirmishes in the Channel, with existing transitional rules that give EU boats access to British waters set to expire at the end of the year.

In 2018, British and foreign fishing vessels were involved in a number of clashes which were swiftly dubbed the scallops wars.

A spokesman said the MoD “has conducted extensive planning and preparation to ensure that defence is ready for a range of scenarios at the end of the transition period”.

The 80-metre-long vessels will have the power to stop, check and impound all European Union fishing boats operating within Britain’s exclusive economic zone (EEZ), which can extend 200 miles (320 km) from shore.

A French minister said on Thursday that France would compensate its fishermen and take other measures to help them if talks for a post-Brexit trade deal collapse, in an effort to avoid skirmishes at sea between French and British boats.

France’s President Emmanuel Macron has dug his heels in on the issue, and has made it clear he is in no mood to compromise.

He said he would not budge on fish: “I’m not asking to have my cake and eat it, no.

“All I want is a cake that’s worth its weight. Because I won’t give up my share of it either.”

“A no deal Brexit will already impact us hugely.

“And then we are going to have to share our French waters with foreigners as well.”

Another, Nicola Margolle, added: “If there’s a no deal it’s going to be complicated because European boats won’t have access to British waters anymore.”

“So we’re all going to find ourselves in the French strip – with all the Belgian, Dutch boats, the French, of course.

“There’s never going to be enough room for everyone.

“And so the resources are going to be wiped out.”

However, speaking on Thursday, Boris Johnson’s official spokesman made it clear there would be no compromise on the UK side.

They said: “Once we leave the end of the transition period, we will take back control of our waters and we would never accept arrangements and access to UK fishing waters that are incompatible with our status as an independent coastal state.”