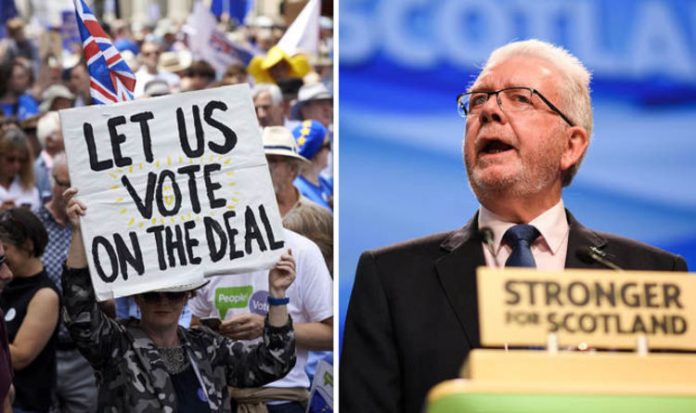 The demand comes from Mike Russell, the Constitutional Relations Secretary in Nicola Sturgeon’s cabinet, who said that people “require” such a ballot.

The Scottish minister is the first SNP politician to openly back a second vote on Brexit.

While other members of the Scottish government are said to be “sympathetic” to the idea, they have never openly called for it, fearing it could set a precedent if Scots were to hold another vote for the independence of the nation.

But Mr Russell said if Scottish voters showed again their desire to remain in the EU as opposed to England, the government should take appropriate measures to answer the Scots’ desire.

He said: “I’ve been very sympathetic to that, the only caveat I’ve expressed, and it needs to be resolved, is what happens if that vote were to repeat what happened two years ago – Scotland to vote to stay and the rest of the UK to vote to leave.

“We couldn’t do that twice. So that has to be resolved.

“We are in the most extraordinary, the most difficult times that I can certainly remember.

“They are not being helped by certainly the most incompetent UK Government I have ever seen.

“So there needs to be a clear choice. If the choice is Brexit Britain in this chaos and mess or independent membership of the EU, that would be a real choice.”

Mr Russell’s demand comes as Prime Minister Theresa May gathers her Cabinet at her country residence in Chequers, Buckinghamshire.

There, theGovernment is to discuss what Britain’s relationship with the EU could look like after Brexit.

Mr Russell also blasted Mrs May over the Brexit talks.

Speaking about her attempts to find a workable proposal that would be acceptable to the other 27 EU nations, he said she is “very far from being out of the wood”.

The proposed vote was welcomed by the Liberal Democrats, who have been campaigning in favour of a second Brexit referendum since the first vote in 2016.

Scottish Lib Dem Europe spokesman Tavish Scott said: “It appears the SNP are finally starting to see the light. Mike Russell is right that the British people deserve to have the final say on whether Theresa May’s ropey Brexit deal is good enough.

“He does, however, need to give up on the constant caveats. This isn’t about political posturing. It’s about warding off economic disaster.

“We’re two years into this process and the Cabinet is in the midst of yet another crisis meeting to settle on its position. That is absolutely ridiculous.

“Political momentum is building for a People’s Vote and hundreds of thousands have taken to the streets to fight for one. All pro-Europeans need to get on side before it is too late.”