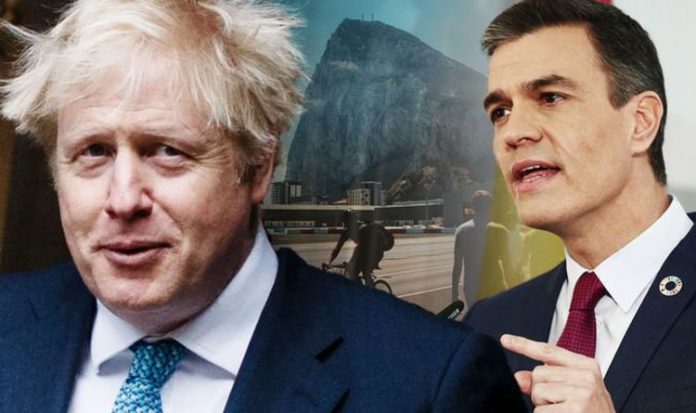 Brexit: UK and Spain agree on draft deal for Gibraltar

Gibraltar was set to become the only hard EU border until Prime Minister Boris Johnson secured a deal on December 31, with just hours to go before the transition period officially ended. It is the only British Overseas Territory which has ever been part of the European Union and so it was often caught in the crossfire during Brexit negotiations. Anti-Brexit protests actually rocked the territory back in 2019 as only four percent of its citizens voted to leave.

Combined with Spain’s growing claim on Gibraltar — a battle which was reignited with the EU referendum — the territory became a major source of contention between the UK and the bloc.

However, the astonishing last-minute deal has secured a four-year arrangement which has actually left the overseas territory in a uniquely advantageous position — despite anti-Brexit criticism from the Gibraltarian residents in recent years.

German outlet, Deutsche Welle, explained: “The Rock’s inhabitants were able to secure widespread privileges under the Brexit deal that sealed Britain’s exit from the European Union.

“To avoid a hard border with Spain, Gibraltar wil join the EU’s Schengen zone and follow other EU rules while remaining part of the United Kingdom.

“The EU plans to install Frontex border guards to facilitate free movement to and from Gibraltar.”

The territory will still leave the trade bloc.

But the new deal means there will be no need for controls between Spain and Gibraltar — instead, the territory’s airports and port will become the EU’s external border.

The report continued: “After Brexit, Gibraltarians now enjoy even more rights than their fellow nationals living in mainland Spain.

“Unlike them, they are allowed full freedom of movement within the Schengen zone.

“This has caught the ire of Spanish nationalists, who are still dreaming of repatriating the Rock after more than 300 years of being in British hands.”

Gibraltarians are British citizens and generated the third-highest GDP per capita in the world in 2018.

Spain has been lobbying to reclaim the territory since the 2016 referendum.

Madrid was also backed by the EU when it insisted on having an additional privilege in the trade talks over the territory.

It requested the power to exclude Gibraltar from any Brexit trade deal.

Madrid also pushed to include the Rock in the EU’s opening negotiating position last year.

A senior EU diplomat explained at the time: “They have in principle asked that the new relationship not apply to Gibraltar without the explicit consent of Spain, which will only be given if the bilateral talks with Spain and the UK over the rock are resolved.”

Despite Spain’s objections, this new deal will satisfy the Gibraltarians as it enables them to still be part of the UK.

Brexit timeline — the UK and Spain reached a deal on Gibraltar on the last day of the transiiton period (Image: Express)

Notably, 98 percent of its citizens rejected the idea of joint sovereignty with Spain in 2002.

The fear of being taken over by Spain, or being isolated completely, evidently drove much of the anti-Brexit sentiment in the area.

More than 2,000 British expats protested Brexit in October 2019, because they claimed they were already experiencing isolation.

A member of a pro-EU party Volt, Ana Rosada, said: “The old conflicts that were pacified by the EU are going to resurface.

“Volt are supporting the people of Gibraltar who are going to be isolated.”

It’s worth noting Spain’s foreign minister Arancha Gonzalez Laya did not confirm whether the deal means Spanish security forces would be in Gibraltar, which was a major sticking point.

Where a no deal Brexit would have hit the hardest (Image: Express)

The deal will be turned into a treaty in the next six months after being sent to Brussels.

There are still many unanswered questions, but these arrangements are to be in place for an initial period of four years.

As Mr Picardo noted: “I think it’s important to temper this moment with the understanding that what we have is an in-principle agreement, not a treaty.

“When we go to the European Union, we need to ensure that the European Commission shares our enthusiasm for this to happen.

“There will be complexity to come. We may end up with a deal on the movement of people but not goods.”