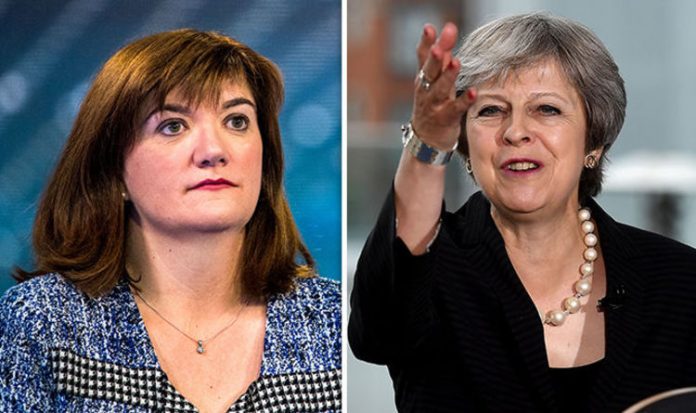 Because of their certainty, there was little planning in place for the eventual Leave vote backed by more than 17 million of the British electorate.

Speaking at the Beer and Brexit event organised by think tank UK in a Changing Europe, Ms Morgan said MPs had learned “huge lessons” from their lack of planning in 2016.

She told the audience: “The honest truth was I think we did think the Remain campaign would win.

“There was always that battle in Government of how much time and money do you invest in a scenario you think is not going to happen.”

Comparing the previous Government’s planning with Theresa May’s preparation for a ‘no deal’ Brexit, Mrs Morgan said: “We’re seeing that play out with the ‘no deal’ preparations at the moment.

“It would be fair to say that there wasn’t the contingency planning for a Leave vote and I think we’ve all learned huge lessons from that.”

Despite the Brexit chaos, the MP for Loughborough lavished praise on her former boss.

She said: “I’m a huge fan of David Cameron, I really enjoyed working with him – he and George Osborne were extremely good bosses.

“I know people have extremely strong views, but they should have strong views of people in those positions.”

Nicky Morgan is a prominent rebel when it comes to matters of Brexit, regularly voting against Theresa May when EU exit bills are put before the Commons.

Earlier this month, she was one of 14 Tory MPs who voted against the amendments to the Brexit bill.

In May, Ms Morgan joined forces with Labour and Lib Dems and declared the UK was being “held to ransom” by the process of leaving the Brussels bloc.

Alongside David Miliband and Nick Clegg, Ms Morgan penned an article which said: “Less than six months before the deadline for concluding the terms of our departure, hard-Brexit demands are holding the country’s negotiating position to ransom.

“The ensuing economic pain will be felt in every part of the country.

“This is not Project Fear; it is project reality based on the government’s own analysis.”