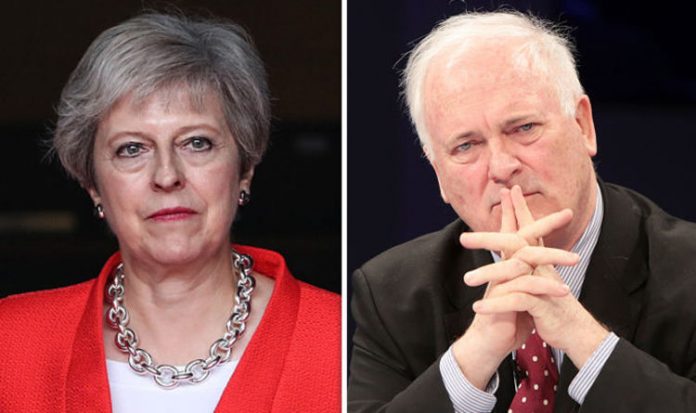 The Prime Minister said yesterday that another vote on EU membership would be a “gross betrayal of our democracy”.

She said “millions had their say” in the June 2016 vote, amid calls for a second vote on the UK’s relationship with the EU.

But Mr Bruton condemned her argument as “nonsensical” and even compared her stance to totalitarian regimes.

He said: “If she believes that, she does not understand democracy very well.

“Totalitarian or dictatorial regimes, who do not hold regular elections, do not a have an inbuilt mechanism for changing their minds.

“This makes them brittle. Democracy, in contrast, is flexible.”

The comments come after Mrs May wrote an article in the Sunday Telegraph to defend her Chequers proposal.

Her plan would maintain some ties with the EU, but she claims she will not be pushed around by the EU.

She wrote: “I will not be pushed into accepting compromises on the Chequers proposals that are not in our national interest.

“The coming months will be critical in shaping the future of our country and I am clear about my mission.”

But former Brexit Secretary David Davis, who resigned from Cabinet following the announcement of the Chequers plans, says Mrs May’s concessions would allow the EU to dictate terms.

Mr Davis urged Mrs May and her Cabinet to be “more determined” to ensure Britain obtains the deal it wants from the European Union.

Speaking to ITV News on Monday, Mr Davis said: “Boris has got a point, we have to be tough with the Europeans.

“We have to be more determined about it and we have to have a very clear idea of what we want.”