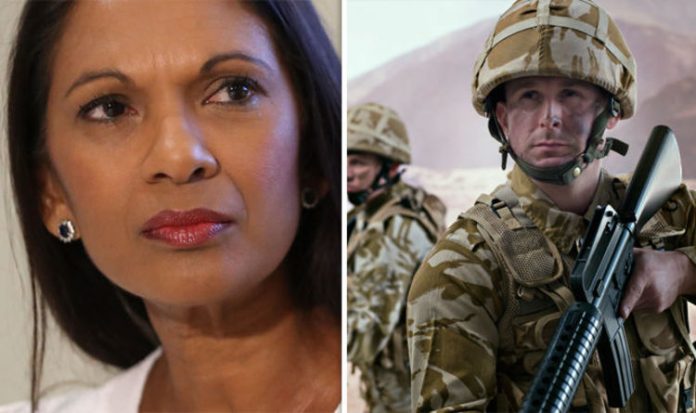 The businesswoman, who launched an appeal at the Supreme Court to challenge the triggering of Article 50 without a vote in Parliament, claims the army has been “alerted” for a no-deal scenario.

She also claims the UK is reliant on the EU for “infrastructures, talents and funds” and a no-deal would be a “recipe for disaster”.

The campaigner said: “It is the recipe for disaster. Not only economical and logistical but also political and social.

“I know for sure that the army has been alerted to face the inevitable disorders and violence that would follow an exit without agreement, to which we are not absolutely prepared: Britain still counts on European infrastructure, talents and funds.

“I am not saying that we can not replace them with our own, in the future, but it takes a long time.”

Mrs Miller claims a no-deal would be the end of the United Kingdom which would leave England isolated.

She said: “And I mean it literally, Northern Ireland, Scotland and Wales would end up breaking off and form a sort of alliance around an England that would then remain isolated.

“If this happened, chaos would be such at that point I think people would change their mind and the European Union would come out stronger.”

Mrs Miller has ruled out a second referendum

She claims it is not only because the outcome would be uncertain but also because “it would not serve to heal a country consumed by divisions”.

Mrs Miller: “I believe instead in an advisory vote with three options to be submitted to the Parliament.

“I have the feeling, however, that we will end up with early elections and perhaps a Government of national unity, unless, of course, the United Kingdom asks for more time for the transition, which Brussels would be ready to grant.”

Speaking on the BBC on August 30, Mrs Miller said she believes it is an “impossible task” for Britain to strike a deal with the European Union during the last phase of talks.

She urged British politicians to “put aside the division” and “be honest” with British citizens about what to expect after the UK officially withdraws from the EU in March 2019.

Speaking to BBC News, Mrs Miller said: “In the ten weeks we have left from next week, when Parliament returns, I think it is an impossible task to get a deal from where we are now in ten weeks time.

“The division of particular parties, or Leave and Remain, all of that has to be put aside and politicians across the spectrum have to now be completely honest and straightforward and plain-speaking to the people of Great Britain.”