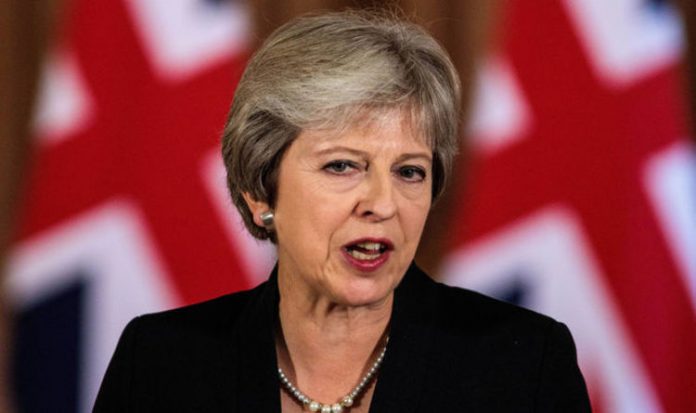 Some 60 percent of voters said they support Mrs May’s tough new stance on the exit from the European Union, following her speech at 10 Downing Street yesterday when she demanded Brussels treats the UK with “respect”.

It comes after EU leaders shunned Mrs May’s Chequers blueprint at a meeting this week in Salzburg, Austria.

Mrs May said the UK and the EU were at an “impasse” after European Council president Donald Tusk rejected her Chequers plan.

She said: “Yesterday Donald Tusk said our proposals would undermine the single market. He didn’t explain how in any detail or make any counter-proposal. So we are at an impasse.”

Foreign Secretary Jeremy Hunt has today spoken out in support of the Prime Minister.

Speaking to BBC Radio 4, he said: “What Theresa May is saying is ‘Don’t mistake British politeness for weakness. If you put us in a difficult corner we will stand our ground. That is the kind of country we are.’

“Insulting her on social media, getting to these stand-offs where you are calling people liars and so on is not the way we are going to get a solution to this difficult situation.

“If we are going to work seriously towards a solution then we need to avoid revving up the situation, making it worse by appealing to audiences on social media.”

Mr Hunt called on the EU to “step back from the abyss”.

He said: “This is a time for people in the EU to step back from the abyss, to sit down and to talk to us about how we can make these sensible, concrete proposals actually work.”

Mrs May’s Chequers plan has faced widespread criticism from Remainer and Brexiteer MPs, with Boris Johnson and David Davis resigning from the Cabinet in protest.

Jacob Rees-Mogg, chair of the influential European Research Group, praised Mrs May’s tone, but called on her to drop Chequers.

He said: “The tone is strong and forthright and shows confidence in the UK’s future.

“However, there is still no reason to suppose that Chequers can work either for the UK or the EU.

In a statement yesterday, Mr Tusk said he thinks the bloc can still reach a deal with the UK.

He said: “While understanding the logic of the negotiations, I remain convinced that a compromise, good for all, is still possible. I say these words as a close friend of the UK and a true admirer of PM May.”