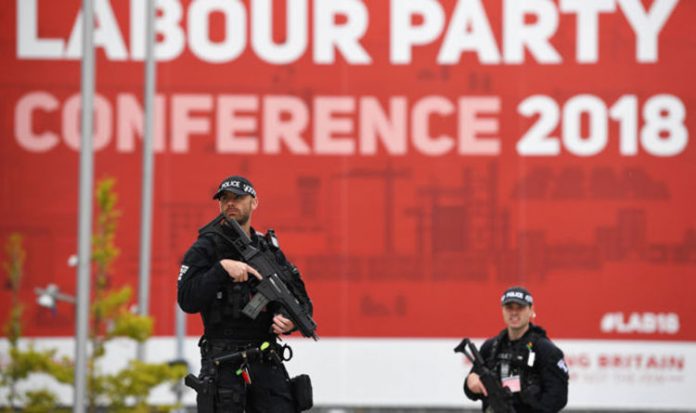 Bodyguards will be drafted in to protect guests at the Labour Friends of Israel’s annual reception and the group has scrapped its usual stand in the conference exhibition over safety fears.

The Tuesday night event will be attended by Deputy Leader Mr Watson and the group’s chairman, Labour MP Joan Ryan, who has been threatened with deselection.

Even though the reception will take place within the conference secure zone, Labour Friends of Israel has accepted extra security assistance from the party.

The Labour conference, which gets under way in Liverpool tomorrow, plays host to a controversial academic who has claimed Zionists stopped Jews escaping the Holocaust.

He will speak at an event called by the hard-Left Jewish Voice for Labour group, which believes the international definition of anti-Semitism “is used to silence Palestinian voices”.

The emeritus professor at the London School of Economics sparked outrage earlier this year when he claimed “the Zionists” prevented hundreds of thousands of Jews escaping Germany before the Second World War.

He said: “Just before the outbreak of war, the United States had organised for hundreds of thousands of Jews to escape from Germany and go – not to the United States, certainly, but to a number of Latin American countries that had agreed to have them.

“And in those last few weeks before the war, the Zionists stopped that from happening. And the result was, hundreds of thousands of Jews who would have escaped did not.”

A string of academics criticised the claims as “baseless”.

Jewish Voice for Labour – which was founded last year and opposes the official Jewish Labour Movement – says it “campaigns tirelessly to defend democracy and the socialist Corbyn Project”.

Mr Corbyn earlier acknowledged shortcomings in Labour’s handling of allegations of sexual harassment and abuse in the party when he addressed Labour’s Women’s Conference.

He said: “We have not always met necessarily the highest standards, which rightly are demanded of us.

“I am absolutely determined our party and our movement will always have the very highest standards so everybody is safe and secure in our movement and sexual harassment has no place whatsoever in our movement.”