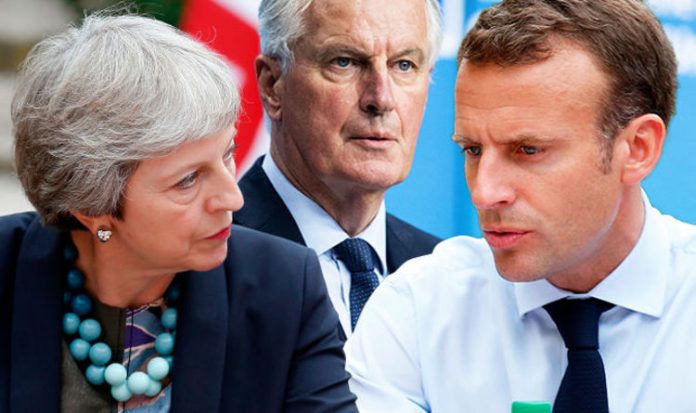 The Prime Minister cut short her holiday in Switzerland to visit Mr Macron in the south of France to try to persuade him of the merits of her Chequers plan to form a deep and close partnership with the EU.

The discussions were shrouded in secrecy with the two just posing for pictures and publicly exchanging warm words.

It is understood that apart from a few officials only the Prime Minister’s husband Philip May and Mr Macron’s wife Brigitte were present joining them for dinner.

But sources in Brussels have said that President Macron is the main obstacle to achieving agreement on a deal with France consistently being the voice rejecting compromises offered by the UK.

Mrs May enjoyed a four-course dinner at the seaside holiday home of Emmanuel Macron as she lobbied the French President about Brexit.

She arrived at Fort Bregancon, on the Mediterranean coast near Toulon, in the early evening after breaking off from a walking holiday.

An Elysee Palace source denied that France was the main obstacle, telling Le Monde: “The absence of an agreement on the withdrawal is not a scenario that we, as our partners, wish.”

Despite this, the source said there would be no official announcement or agreement from the meeting, and that Brussels was still making the key decisions.

A British official concurred, saying: “There will be no declaration afterwards. It’s just a routine working get-together.”

It will be the fourth high-level meeting between UK and French politicians in France in eight days, as the British lobby their counterparts.

Before her meeting with the French President it also emerged that Mrs May had a telephone conversation with EU Commission President Jean-Claude Juncker, in what observers saw as a bid to move talks on.

The discussions have followed warnings by Foreign Secretary Jeremy Hunt in visits to a number of European capitals that the EU risks accidentally ending up with “no deal” which would mean it does not get the £39 billion divorce bill and will suffer the consequences of lost access to the UK market.

A failure to get a deal and go on to World Trade Organisation (WTO) terms with a World Trade deal on the contrary could be highly prosperous for the UK with countries operating on those terms doing three times better than EU member states.

Ahead of the talks, an EU diplomat told the Express that pressure is mounting from some member states for a change on the Brussels hard line by chief negotiator Michel Barnier.

The insider said: ”Michel Barnier is still the EU27’s chief negotiator but his negotiating guidelines are set by heads of state.

“By visiting Macron and Merkel, Prime Minister May is going over Barnier’s head and they can change under pressure.”

It is understood the Germans are open to concessions and Mrs Merkel has approved of the controversial Chequers plan which creates a common rule book on goods but excludes services.

However, Mr Barnier, whose language has noticeably softened this week has nevertheless attacked the proposals for undermining the EU single market.

Reports suggest that the French government is the strongest voice supporting this line.

An EU diplomat said: “Do you know the country blocking the most compromises? France, they are the toughest on the UK.”

The discussions with Mr Juncker have led to a commitment that Mrs May will be handed the opportunity to tempt European counterparts into offering a number of Brexit concessions as EU leaders hope to reduce the risk of a no-deal scenario.

The Prime Minister will be given the floor at a dinner meeting between heads of state from the 28 European Union members and other key Brussels figures to sell her Brexit plan and help avert a no-deal.

Britain’s departure will be the only topic on the menu at the working dinner meeting, which will feature as an integral part of the informal summit hosted by Austria in September as part of its EU presidency.

The Salzburg summit represents an opportunity for Brexit to be discussed between the EU27’s leaders and Mrs May, which allows the Prime Minister to temporarily sideline Brussels’ negotiator Michel Barnier in order to secure a shift in their guidelines.

In normal Brussels convention, the Prime Minister is excluded from Brexit discussions held at the highest level.

At June’s EU Council summit, she was given 15 minutes to brief her counterparts ahead of the recent White Paper release.

At the September summit, Mrs May will be permitted to field questions from her European counterparts in a bid to resolve outstanding issues, such as the Irish border and Gibraltar.