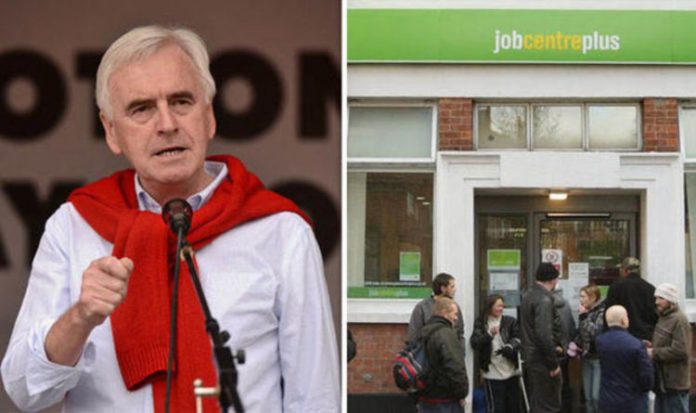 A universal basic income (UBI) would see every adult in the UK receive a certain amount of money a year, regardless of whether they are employed.

However, the Centre for Social Justice (CSJ), founded by former Tory leader Iain Duncan Smith, has warned that Mr McDonnell’s dangerous plan to introduce a UBI for everybody will divert cash away from those who need it most.

CSJ head of policy Edward Davies said the most disadvantaged households would receive less than half the sum they do under universal credit and could provide a massive disincentive for people to find work.

“The idea of universal basic income is absurd,” he said.

“The entire point of welfare is to provide a safety net for the most vulnerable, while at the same time, empowering them climb back out of poverty.

“Universal basic income would riddle that safety net with holes.”

Mr Davies said UBI supporters fail to understand the true nature of poverty, which he said was not caused simply by lack of money but also family breakdown, educational failure, debt, addiction and long-term worklessness.

He added: “Without addressing how an individual becomes poor, no amount of money will offer a long-term solution to their situation and social justice will not be done.”

The report said UBI payouts could be no higher than £6,200 a year per adult without “bankrupting the exchequer”.

The plan to bring in a universal income was Labour’s response to the welfare reforms brought in by Mr Duncan Smith to help make work pay and break the poverty trap for those stuck on benefits.

Mr Duncan Smith’s universal credit programme, has simplified the complicated benefits system and is being rolled out across the country.

But teething problems have led to demands from leftwing Labour campaigners for it to be dropped and replaced with handing out vast sums of taxpayers’ money in new welfare payments.

Universal credit provides a single unemployed parent with two children more than double that at £16,750 a year.

Mr Duncan Smith said a UBI would be disastrous.

“A basic income in the UK would require a giant tax hike for all, hurting those on the lowest incomes the most,” he said.

“It would send businesses fleeing the country in droves and would bankrupt the exchequer.

“Fans of a basic income also assume robots will replace jobs. Some jobs will go and new jobs will take their place.

“To succeed, we need to be able to adapt to change. Basic income is a direct disincentive to retrain, upskill and seize new opportunities.”

Labour has disputed the CSJ report.

A Labour spokesman said: “Under the disastrous Universal Credit system introduced by the Tories, there has been a stark increase in food bank use.

“We’ve seen an increase in rent arrears, evictions and food bank use in areas where Universal Credit had been rolled out.

“In areas which have had UC fully rolled out for a year or more, there was an average increase of 52 per cent in food bank use in the 12 months after the rollout compared with the year before.

“Labour has set up a working group to investigate the feasibility of a basic income, which will report in due course.”

Prince Harry asked brutal question after ‘heartbroken’ claim – ‘Why did he do it then?’ | Royal | News (Reports)