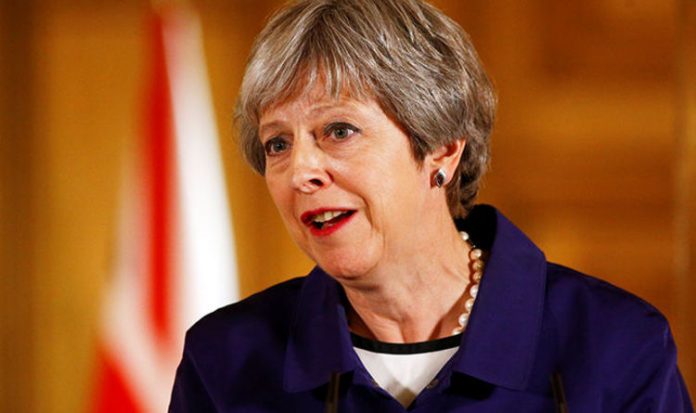 Mrs May is expected to put forward her eagerly anticipated “third option” for the future relationship between the UK and the EU on Friday but a think tank has urged her to not simply rehash earlier, failed ideas.

Dr Radomir Tylecote, Senior Research Analyst in the International Trade and Competition Unit of the Institute of Economic Affairs think tank, said “it is vital” Mrs May brings new, ambitious ideas to the table.

Dr Tylecote said: “While it has been rumoured that this will be another resurrection of the defunct partial customs union, partial single market for goods, or ‘new customs partnership’ (NCP) idea – which see the UK collecting tariffs for a central EU pot, continuing to pay into the EU, and stop us controlling our own regulation.

“It is vital that any deal does not include these things.

“For the great Brexit opportunity to be possible, and for other countries to want to negotiate with us, we must have control over our regulations and over our tariffs.”

Mr Tylecote stressed Mrs May had already committed the UK to having control of its own regulation of “borders, laws and money” in her Mansion House speech delivered on March 10, in which she said: “We want the freedom to negotiate trade agreements with other countries around the world. We want to take back control of our laws. We also want as frictionless a border as possible between us and the EU.”

He said: “All ministers not only have an obligation to stick to that, but to do what will give Britain the chance for massive economic growth, not allow the sluggish disappointment of our economy under EU regulation to continue.

“And that means no attempts to keep us an EU rule-taker by the backdoor. These attempts keep coming.

“But if we cannot set our own rules for our own economy and they are set by the EU instead, that means two things: first, we won’t be democratic, and second, our economy won’t work as well, because many of these rules are terrible for business. That’s something any minister can see.

“If the government doesn’t set a course for a UK-EU free trade agreement allowing UK control over our tariffs and regulations, with just a short interim period to get systems ready, I imagine Brexiteer ministers will know the great Brexit opportunity is being taken off the table.

“Anyway, the issue of regulatory alignment has already been discussed at Chequers. The result was that we would have the ability to diverge. It is not clear why it needs to be discussed again.”

Mrs May’s Brexit showdown on Friday comes amid a background of increasing tension in her cabinet, with reports of friction between Home Secretary Sajid Javid and Chancellor Philip Hammond and suggestions Foreign Secretary Boris Johnson could even quit if he felt Mrs May was making too many concessions to Brussels.

Mr Tylecote said: “I don’t think there is any question of people quitting, because we assume the government is not going to needlessly damage the economy for the sake of a few Brexit interest groups that benefit from the status quo.”

He also urged Mrs May to take a bold approach and seize the initiative rather than anything which could be perceived as papering over the cracks.

He explained: “Sooner or later our country needs to grasp this opportunity.

“The idea of kicking the can down the road only takes hold if people think independent trade is some crisis to be scared of. That’s nonsense.

“It is a huge opportunity to make Britain and the world better off, and to get out of an EU system that is pushing its harmful, protectionist regulation and economic system on the world.

“The more time we waste, the more pressure the EU and its supporters pile on, saying ‘you don’t have time to be ready now and you’re heading for a cliff edge’.
“It’s a kind of psychological leverage. Clearly that can’t go on much longer.

“The EU is very good at running out the clock on negotiations.

“We need to take control of our own destiny and negotiate with third-parties, not allow ourselves to be the captive of the EU in negotiations.”