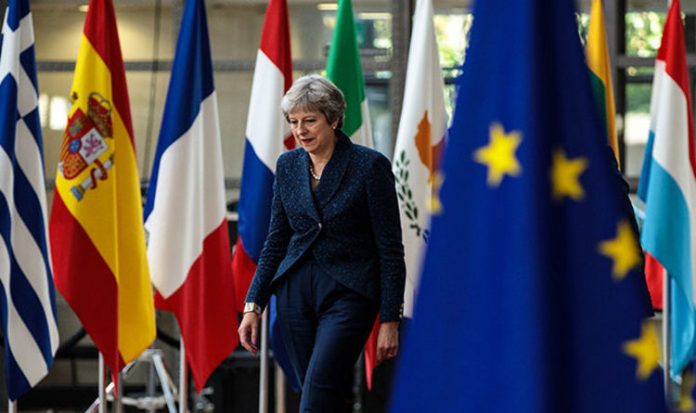 Speaking at an annual fundraiser at the Hurlingham Club, west London, the Prime Minister said the stakes have never been higher in British politics, and begged her Party to put squabbles aside for the good of the country.

The Prime Minister has been blighted by Tory in-fighting and threats from other MPs and ministers that could see her being thrown out of office over the UK’s exit deal with the EU.

In her speech to high-flying party members seen by The Sun, Mrs May said: “So the stakes are high.

“Perhaps higher than we have ever known in our lifetimes.

“We each have a choice to make.

“Will we come together and stand together as a party, as a government, and as a country?

“Will we find the boldness, the courage, and the discipline to unite as one for the good of our nation and fellow citizens?

“Or will we be divided and allow the scale of the challenge, the complexity of the questions to overwhelm us?”

May’s rallying cry came on the same day top Brexiteer backbencher Jacob Rees-Mogg threatened a rebellion that could oust her from office unless she delivers a hard Brexit.

Writing in the Telegraph on Monday, Jacob Rees-Mogg said: “The prime minister said, as soon as she took office, that ‘Brexit means Brexit’ and in the last election, in her personal contract with the British people, she declared that we would leave the single market and the customs union.”

The Prime Minister voted Remain in 2016 but has insisted that she can deliver the Brexit will of more than 17 million British voters.

She was unrattled by the Somerset MP’s intervention and pushed for her party to “strike boldly” into Britain’s future outside the EU.

Continuing her speech, the Prime Minister begged: “I want to see the UK standing as an independent nation – outward looking – but with a new economic settlement and security partnership with Europe that sets up that bright future.

“Today in the House of Commons, Jeremy Corbyn said to me – it is time for me to take a side – and I said I had taken the side of British people.

“Once again it is time for this party to stand together in the national interest.

“To be inspired by our past to strike boldly into the future.

“To look the changing world in the eye and have the courage and confidence to meet it head-on.

“It is our mission and we will fulfil it.”