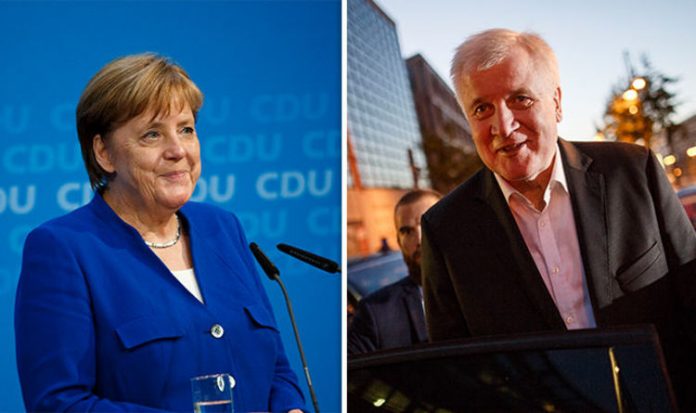 The German Chancellor faces increasing pressure over her stance on immigration after she opened her county’s borders in 2015 to thousands of migrants – only to close the borders again days later.

Now she has toughened her stance and agreed to build camps for asylum seekers.

BBC Journalist Andrew Neil claimed Merkel is trying to “save her government” by backtracking on her controversial 2015 policy.

Mr Neil tweeted: “Chancellor Merkel, who once welcomed hundreds of thousands of migrants into Germany, has now agreed to build camps for those seeking asylum and to tighten the border with Austria to save her government.

“She is writing her final chapter.”

Twitter users were quick to agree with the journalist’s analysis.

One said: “Merkel’s millennium is petering out.

“Looks like it will end in a wee fizzle and a spit without pomp and circumstance.”

Another wrote: “Merkel is finished.”

Ms Merkel said that she had hammered out “a good compromise” on immigration with her rebellion interior minister and long-term critic Horst Seehofer.

Mr Seehofer demanded that Germany blocks migrants at the border if they don’t have papers or if they have already registered in another European country.

In 2015, Merkel pledged an open door approach to immigration and asylum policy, which led to more than one million people arriving, a lot of them from war-torn Syria.

The deal reached on Monday includes building border camps for migrants and tightening the border with neighbouring Austria.

Mr Seehofer said on Monday: “We have reached an agreement after very intense negotiations.

“We now have a clear agreement how to prevent illegal immigration across the Austrian-German border in future.”