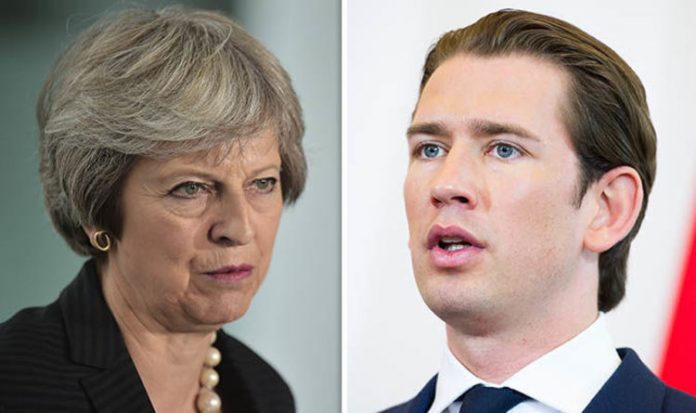 The Prime Minister is travelling to Austria today to hold crunch Brexit talks with Austrian Chancellor Sebastian Kurz, in order to drum up support for her Brexit proposal finalised at Chequers.

He said: “There is a strategy here; the UK is hoping to prise apart the member states that are willing to cut a deal with the UK from what they regard as the purist in the European Commission.

“That is represented by Michel Barnier, who is sticking to the rules.”

Mrs May’s ‘soft’ Brexit White Paper came up against stern opposition on Thursday, after the EU’s chief Brexit negotiator Mr Barnier flatly rejected the UK’s Northern Irish ‘backstop’ model, and the proposal that the UK and EU would collect each other’s tariffs on the border.

Mr Watt said: “Michel Barnier took aim at two core elements of Theresa May’s Brexit plan; firstly on the so-called Northern Ireland ‘backstop’, where he said ‘no’ to the UK’s idea that we would be half in and half out of the customs union.

“Secondly on the future trading relationship, where he also said ‘no’ to a key UK idea that the EU and the UK would collect each other’s tariffs at their borders.”

Mr Barnier took direct aim at Mrs May’s proposal, and declared the EU would not delegate its customs policy and regulations to a third nation following Brexit.

Speaking alongside Brexit Secretary Dominic Raab in Brussels, he said: “The EU cannot and the EU will not delegate the application of its customs policy and rule, VAT and excises duty collection to a non-member who would not be subject to the EU’s governance structures.”

He noted the EU had “no object in principle” to a backstop model being applied to the whole of the UK, but raised doubts over whether it could be implemented while protecting the integrity of the customs union.

He said: “We have doubts that it can be done without putting at risk the integrity of our customs union or commercial policy our regulatory policy.”

Mr Watt raised concerns over the chances of Mrs May achieving a vital breakthrough in her meetings with Chancellor Kurz today in the wake of Mr Barnier’s statements.

He said: “Michael Barnier had a clear answer on that one today, and that is you’re wasting your time.”

However he noted the Government maintains hope of achieving progress with certain EU members states which are more willing to strike a compromise around Mrs May’s Brexit White Paper.

The political commentator concluded: “The UK does believe it is worthwhile; they are for example hearing from member states like Germany a rather more positive response the Chequers.”