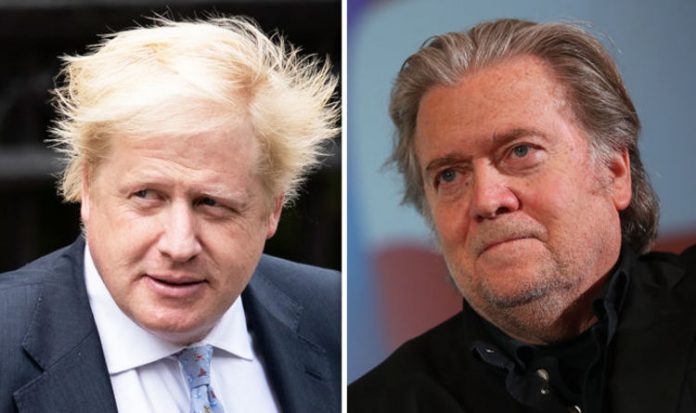 The Brexiteer and former Foreign Secretary spoke to the ex-White House aide when he visited London.

But it is not thought the two met in person.

A source told BuzzFeed: “I’m sure they were not discussing the cricket scores.”

The announcement was a U-turn in his opinion on Theresa May’s Brexit plans outlined at Chequers, after he signed up to the accord just days before.

He wrote that Theresa May’s blueprint would leave the UK as a “vassalage, satrapy, colony status”.

He added: “For the first time in a thousand years our laws will be made overseas, enforced by a foreign court.

Mr Bannon is reportedly planning to set up office in Brussels.

The activist is aiming to bring Donald Trump’s brand of right-wing populism to Europe.

He also praised Mr Johnson during interviews in the UK last week.

Donald Trump himself told The Sun he thought Mr Johnson would make a good Prime Minister earlier this month.

He also described the former Foreign Secretary as a “friend”.

Trump said: “I have a lot of respect for Boris.

“I think he’s got what it takes.

“I think he would make a great Prime Minister.

“He obviously likes me and says very good things about me.”

But Mr Johnson said three years ago in response to Trump’s remarks about “no-go areas” in London: “The only reason I wouldn’t visit some parts of New York is the real risk of meeting Donald Trump.”

He also said Trump was “out of his mind” when the President proposed a ban on Muslims entering the USA.

The ex-London Mayor also said he was “unfit” to be President and suggested his behaviour was “playing the game of the terrorists”.