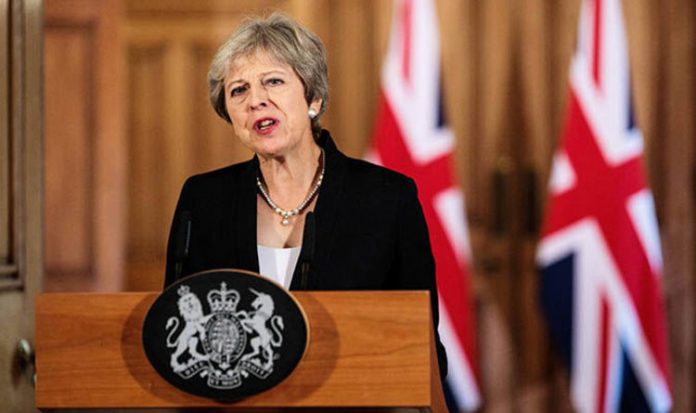 The Prime Minister said during her statement at Downing Street today that the Brexit negotiations were at an “impasse”.

She said: “Yesterday, Donald Tusk said our proposals would undermine the single market.

“He didn’t explain how in any detail or make any counter-proposal.

What does an impasse mean?

An impasse is a situation in which no progress is possible, especially because of disagreement.

In other words an impasse is a deadlock.

What did Ms May mean in her speech?

The Prime Minister warned the EU that she would continue preparations for a “no-deal” Brexit.

Mrs May said: “Yesterday, I was in Salzburg for talks with European leaders.

“I have always said that these negotiations would be tough – and they were always bound to be toughest in the final straight.

“While both sides want a deal, we have to face up to the fact that – despite the progress we have made – there are two big issues where we remain a long way apart.

Mrs May said the first issue was Britain’s economic relationship with the EU after Brexit.

She said: ”Here the EU is still only offering us two options. The first option would involve the UK staying in the European Economic Area and a customs union with the EU.

“In plain English, this would mean we’d still have to abide by all EU rules: uncontrolled immigration from the EU would continue and we couldn’t do trade deals we want with other countries.

“That would make a mockery of the referendum we had two years ago.”

The second issue involved the commitment to no hard border between Ireland and Northern Ireland.

The Prime Minister said: “We both agree that the Withdrawal Agreement needs to include a backstop to ensure that if there’s a delay in implementing our new relationship, there still won’t be a hard border between Ireland and Northern Ireland.”

“But the EU is proposing to achieve this by effectively keeping Northern Ireland in the customs union.

She added: “I have treated the EU with nothing but respect, the UK expects the same”.

“The EU should be clear: I will not overturn the result of the referendum, nor will I break up my country.”