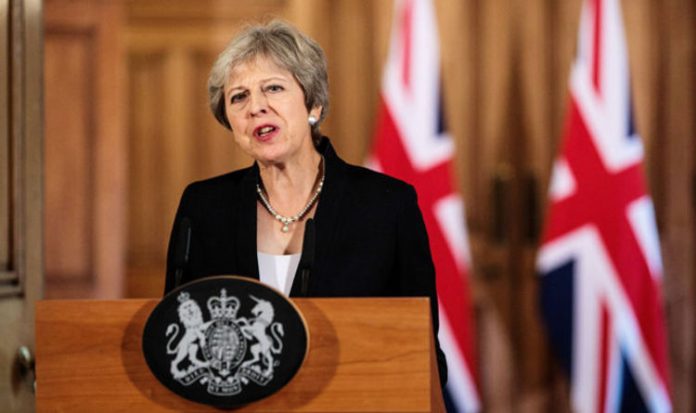 In her speech, the Prime Minister has called on the EU to present fresh proposals on the subjects of Northern Ireland and trade.

Mrs May warned that without Brussels taking a step forward, progress in further Brexit talks would not be possible.

This comes after her Brexit plans were rejected at the EU Summit in Salzburg, prompting negotiations to reach an “impasse”.

The Prime Minister has now firmly placed the responsibility of moving negotiations forward on the EU’s shoulders.

Here are some key quotes from today’s statement on important issues in Brexit negotiations.On the progress of negotiations with the EU:

“I have always said that these negotiations would be tough – and they were always bound to be toughest in the final straight.

“While both sides want a deal, we have to face up to the fact that – despite the progress we have made – there are two big issues where we remain a long way apart.”

On a Norway-style trade agreement:

“In plain English, this would mean we’d still have to abide by all the EU rules, uncontrolled immigration from the EU would continue and we couldn’t do the trade deals we want with other countries.

“That would make a mockery of the referendum we had two years ago.”

On a Canada-style free trade deal and a customs border through the Irish Sea:

“If the EU believe I will, they are making a fundamental mistake.”

On her treatment at the EU Summit in Salzburg:

“Throughout this process, I have treated the EU with nothing but respect.

“The UK expects the same. A good relationship at the end of this process depends on it.

“At this late stage in the negotiations, it is not acceptable to simply reject the other side’s proposals without a detailed explanation and counter proposals.”

On the Irish border backstop:

“The EU is proposing to achieve this by effectively keeping Northern Ireland in the Customs Union. As I have already said, that is unacceptable.

“We will never agree to it. It would mean breaking up our country.

“We will set out our alternative that preserves the integrity of the UK.”

On red lines in negotiations:

“As I told EU leaders, neither side should demand the unacceptable of the other.

On the position of EU citizens post-Brexit:

“First, there are over 3 million EU citizens living in the UK who will be understandably worried about what the outcome of yesterday’s summit means for their future.

“I want to be clear with you that even in the event of no deal your rights will be protected. You are our friends, our neighbours, our colleagues. We want you to stay.”

On the referendum result and her dedication to Brexit:

“The referendum was the largest democratic exercise this country has ever undergone.

“To deny its legitimacy or frustrate its result threatens public trust in our democracy.

“That is why for over two years I have worked day and night to deliver a deal that sees the UK leave the EU.

Theresa May called on the EU to take a step forward and suggest a plan for Brexit (Image: EPA)

“I have worked to bring people with me even when that has not always seemed possible.”

On the prospect of a no deal Brexit:

“No one wants a good deal more than me. But the EU should be clear: I will not overturn the result of the referendum. Nor will I break up my country.